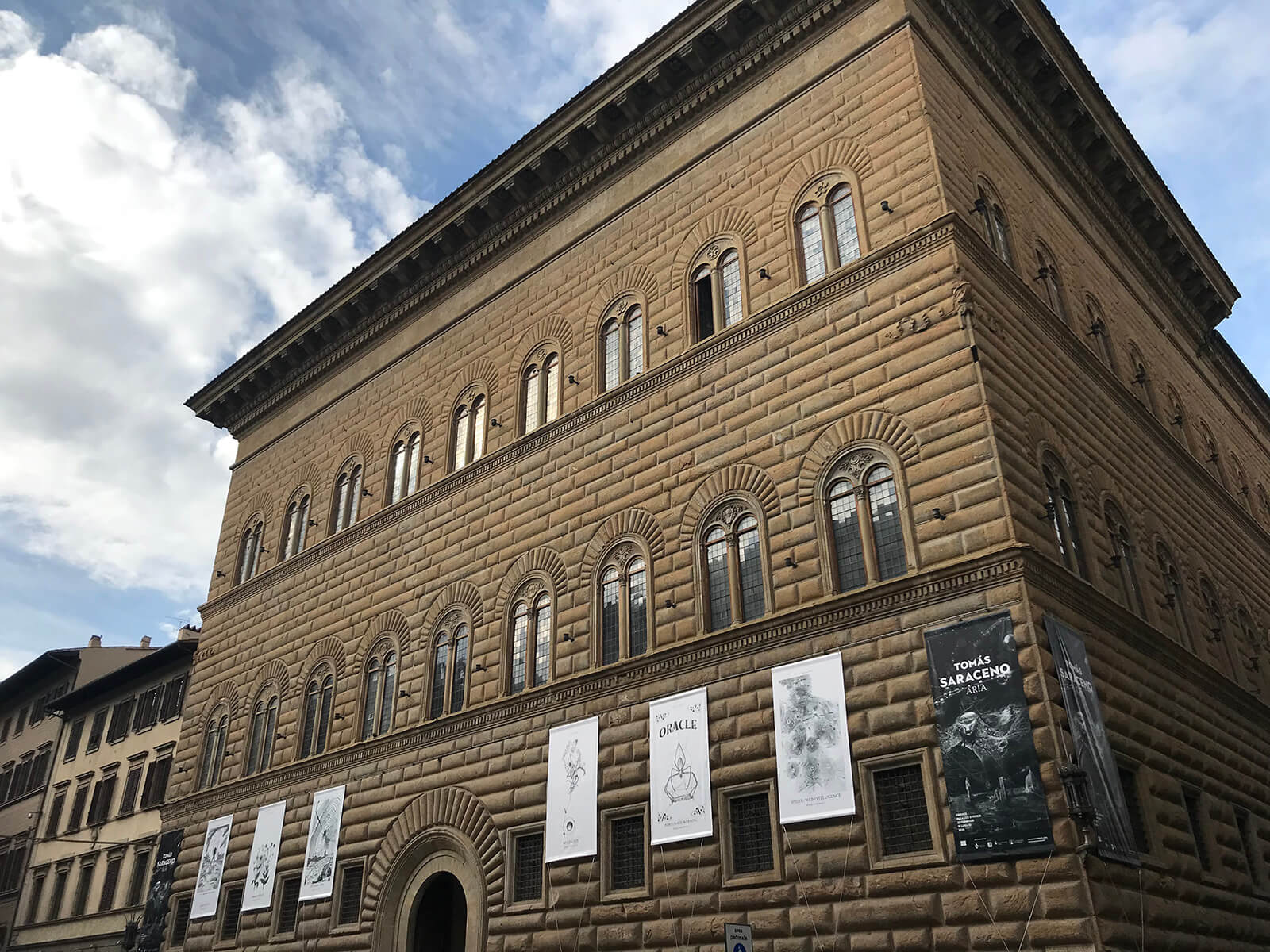 “AIR”, a highly anticipated event that of the new exhibition in Florence by TOMÁS SARACENO, the Argentine artist who more than any other with his art pushes us all towards a profound cultural revolution.
The reason is very simple because inow its themes are those of the Great Actuality : Climate Change, Global Warming, Pollution, Sustainability.
With the difference that while it has also become somewhat fashionable to discuss these topics now, the artist faces and studies of these from many years.
For Florence and Palazzo Strozzi, Saraceno has created installations, so-called “sites specific”, designed specifically for its rooms. Starting from the fascinating and elegant one displayed in the courtyard: “Thermodynamic Constellation”.
These are huge spheres (prototypes of aerosolar sculptures) able to float around the world, free from borders and fossil fuels. 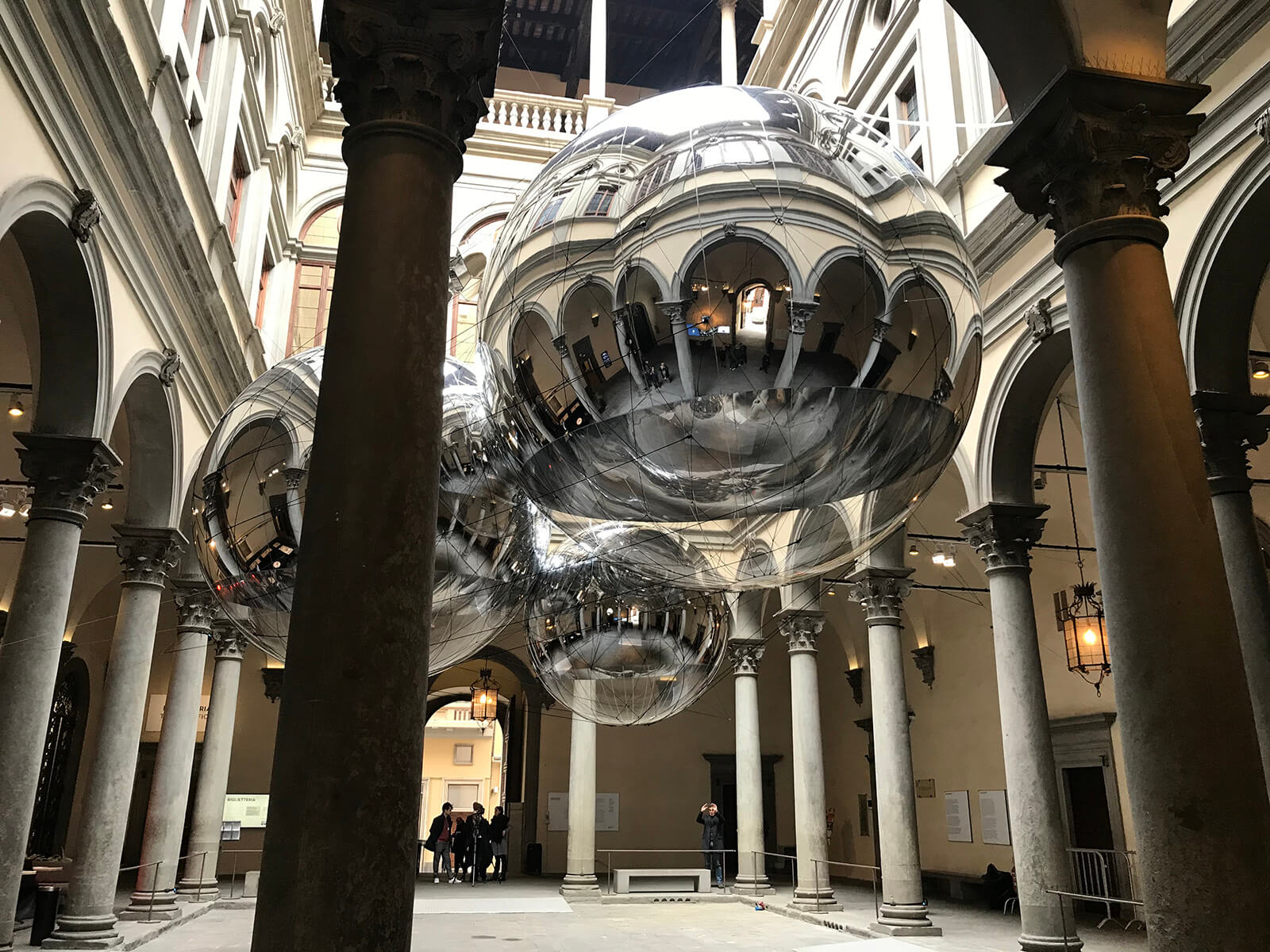 These aerosolar journeys reconsider the ways in which borders are established by humans, reflecting on the power of national institutions to decide who can transit, meditating on policies that dramatically affect vulnerable subjects, human beings and non-human life forms.
This means becoming a nomad of the air, moving from “Homo Œconomicus” to “Homo Flotantis” which is in tune with the planetary rhythms, aware of living together with other beings, human and non-human, and who has learned to float in the air and drifting with the wind, within its primordial being.

The General Manager of Palazzo Strozzi, Arturo Galansino, wrote that “Aria” proposes the passage from man to the center of the universe (founding concept of Renaissance Humanism) to man as part of a whole in which to seek a new harmony through destruction of any hierarchy and pyramidal vision.
A concept that the whole exhibition strongly reaffirms, since they are the fruit of the artist’s words and thoughts: “We live in an era in which the extension of ecosystems is decreasing more and more, in proportion to the intercontinental investments of agricultural multinationals. The rubbish increases and bounces from coast to coast while the wallets of few become increasingly swollen and the toxic fumes of incinerators go beyond the border. ”
And again “What is between us and the sun is controlled by a few and is increasingly compromised: carbon emissions fill the air, fine particles float in our lungs while electromagnetic radiation envelops the earth. Dictating the pace of Digital Capitalism in the era of Global Overheating. ”
And against their perspectives “Aria” proposes and suggests the idea that it is possible to live differently.
Immediately.
In this geological era, the ANTHROPOCENE.
The term indicates the era in which the entire terrestrial environment, in all its physical, chemical and biological characteristics, is conditioned by the effects of human action.
That is, in a nutshell, from pollution.

TO CHANGE EVERYTHING.
“Aria” suggests that Art can and must open the way to new sensibilities. In the name of the common interest, working together with science.
TOMÁS SARACENO, hopes for a perspective where it will be important to “focus less on individuality and more on reciprocity”.
And so “ARIA” born.
The particular exhibition is built around 33 special cards of “tarot”, reinvented by the artist and developed in 9 rooms.
At the center of everything, the figure of the spider and its cobwebs.
Perfect metaphor for the bonds of all that exists in nature. We are all tied together. We are all ONE.
ALL.
That is, we humans, animals, the vegetable and mineral kingdom, the air we breathe and the water we drink, under the light of the sun that illuminates our galaxy.
And each of us. 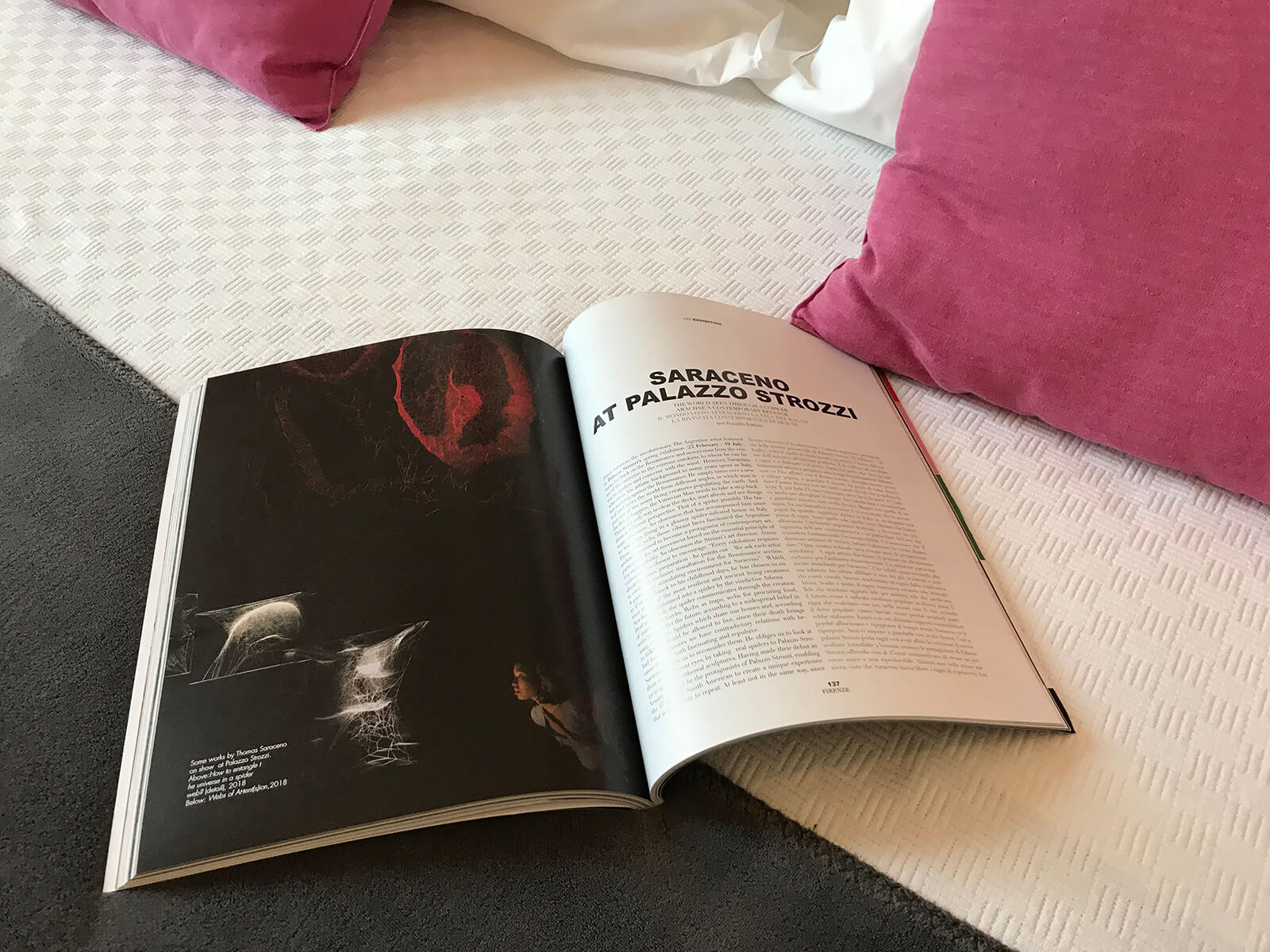 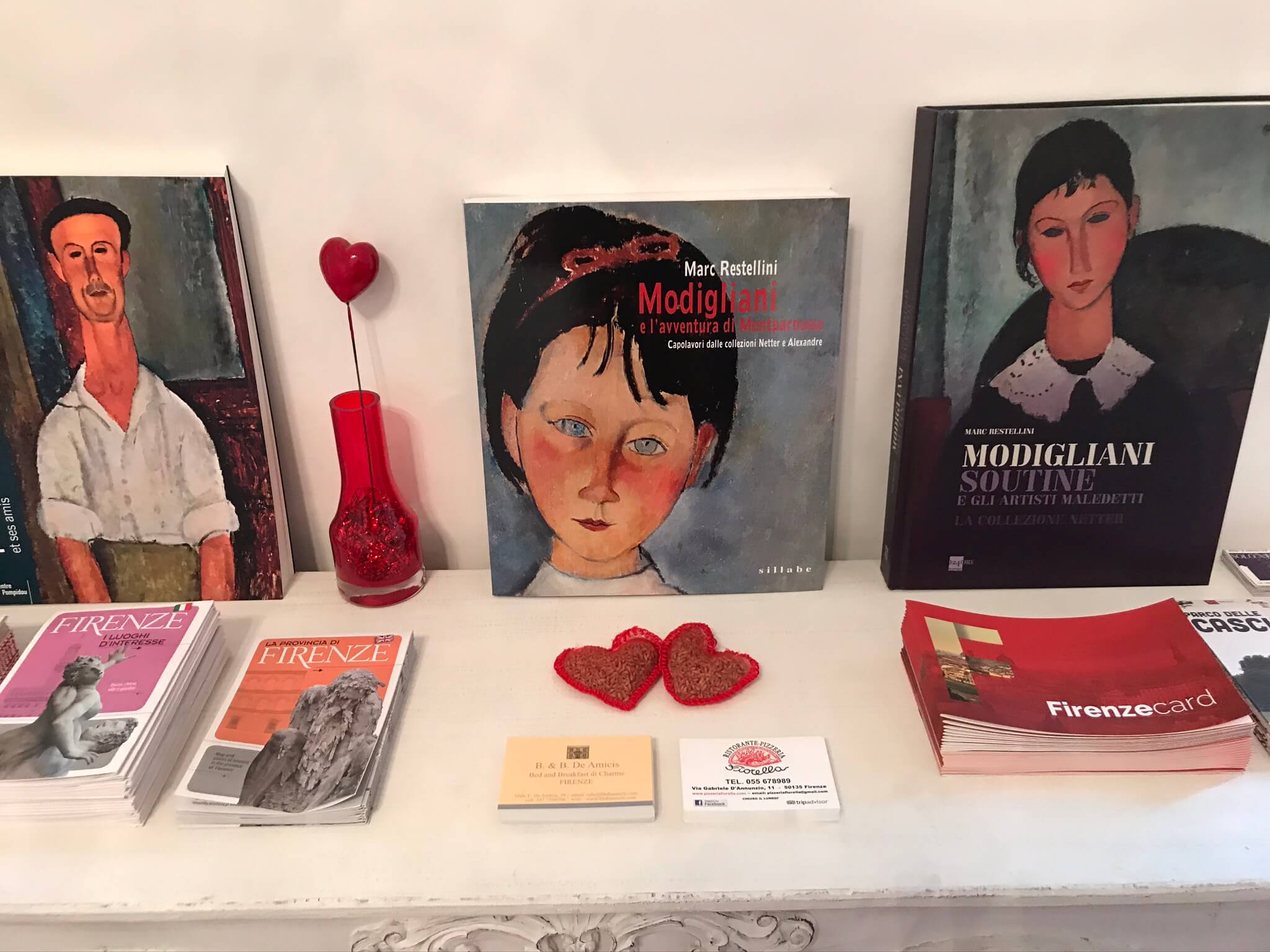 Exhibition Catalogue available for Guests of B.& B. DE AMICIS 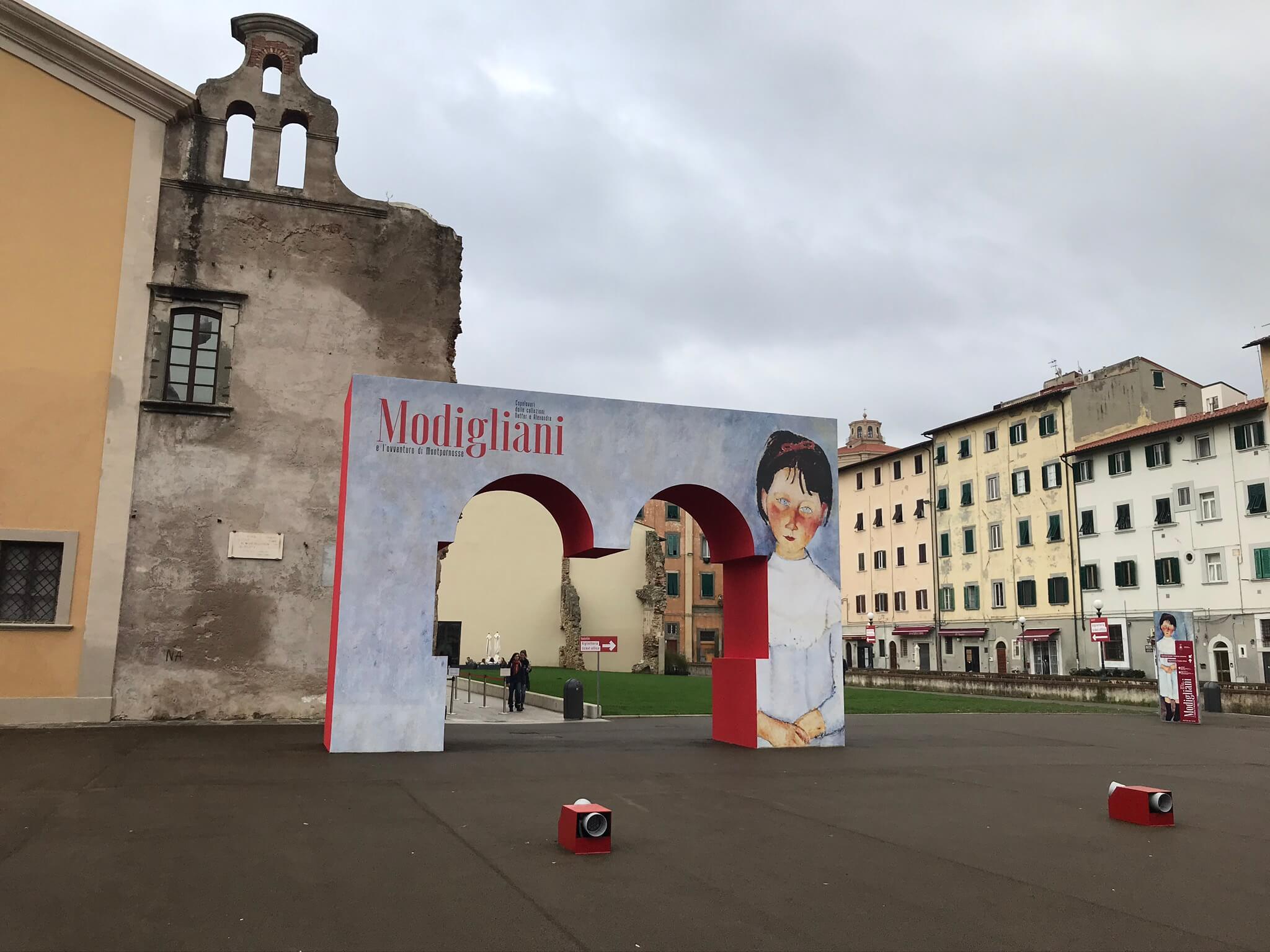 On the occasion of the centenary of the death of Amedeo MODIGLIANI, which took place in Paris in January 1920, they will exceptionally be brought together in the halls of the City Museum of LIVORNO (the city where the Artist was born on 12 July 1884) 26 of his works, as well as to more than a hundred other masterpieces of the Ecole de Paris, which belonged to the two most important collectors who accompanied and supported “DEDO” in his life.

The first is Jonas NETTER, a brilliant collector who collected the most beautiful masterpieces of the young man from Livorno, but also some of the most significant works of the Ecole de Paris.
Among the 14 works by Modigliani from the Netter collection, the portrait Fillette en Bleu from 1918 will be on display; the portrait of Chaïm Soutine from 1916; the portrait Elvire au col blanc (Elvire à la collerette) painted between 18 and 19; the portrait Jeune fille rousse (Jeanne Hébuterne) of 1919, which portrays the beautiful Jeanne Hébuterne in three quarters while she turns to the viewer in an attitude full of naturalness and elegance and capable of capturing attention with her deep blue eyes.

The second is Paul ALEXANDRE, who supported him on his arrival in Paris and helped him in the sculptural project of the Caryatids as well as during his returns to Livorno in 1909 and 1913. Of the 12 drawings, coming from the Alexandre collection, you can admire some Caryatids including the Caryatid (bleue) of 1913.

The MODIGLIANI section begins with 17 works on paper, which document the transition from the first naturalistic nudes to the more geometric phase, inspired by black art, to get to Cariatide (bleue) (1913) which opens the way for women with excessive curves. In his last years of life, Dedo leaves the writer Beatrice Hastings (remembered here with an oil on canvas from 1915) and joins the young artist Jeanne Hébuterne, present in Livorno with a double-sided work: Intérieur au piano (1918) and Adam et Eve (1919). Modì’s nine paintings are portrayed: one more intense than the other and all linked to his daily life, from the bearded face Constant Lepoutre (1919) to the same bearded Leopold Zborowski (1916) with the red beard, up to his colleague Chaïm Soutine ( 1916) with a suffering gaze and a tender and thoughtful Fillette en bleu (1918). But above all the two portraits of the beloved attracted attention: Jeune fille rousse (Jeanne Hébuterne) (1918) with a sensual and disheveled face, and Jeanne Hébuterne (Jeanne Hébuterne au henné) (1918).
“Jeanne was very dark, she had a very sweet air and a regular face with oriental eyes and something dreamy, absent”, thus describes Modì. His works have been much loved by Netter, who bought several, despite being bitterly criticized and almost unsaleable. During his first solo exhibition in 1918 at the Berthe Weill gallery his showcase nudes caused a scandal and the police were called. Friends asked Netter why he bought “all those junk”, but the collector remained convinced of his choice, also supported by Zborowski, who defended his artists like a lion. It is thanks to them that after a hundred years Dedo has returned to his Livorno, with an exhibition that accurately recounts the last years of his life in Montparnasse.

Together with the works of MODIGLIANI, more than a hundred other masterpieces will also be exhibited, also collected by Jonas Netter since 1915. These are representative works of the great Ecole de Paris.
Among these you can admire paintings by Chaïm Soutine such as L’Escalier rouge à Cagnes, La Folle, L’Homme au chapeau and Autoportrait au rideau, painted from 1917 to 1920; works by Maurice Utrillo such as Place de l’église à Montmagny, Rue Marcadet à Paris, Paysage de Corse; works by Suzanne Valadon such as Le Trois nus à la campagne, Andrè Derain with Le Grand Bagneuses, St. Tropez and Portrait d’homme (Jonas Netter) by Moïse Kisling, a Polish artist who left us one of the most emblematic portraits of the collector Jonas Netter. 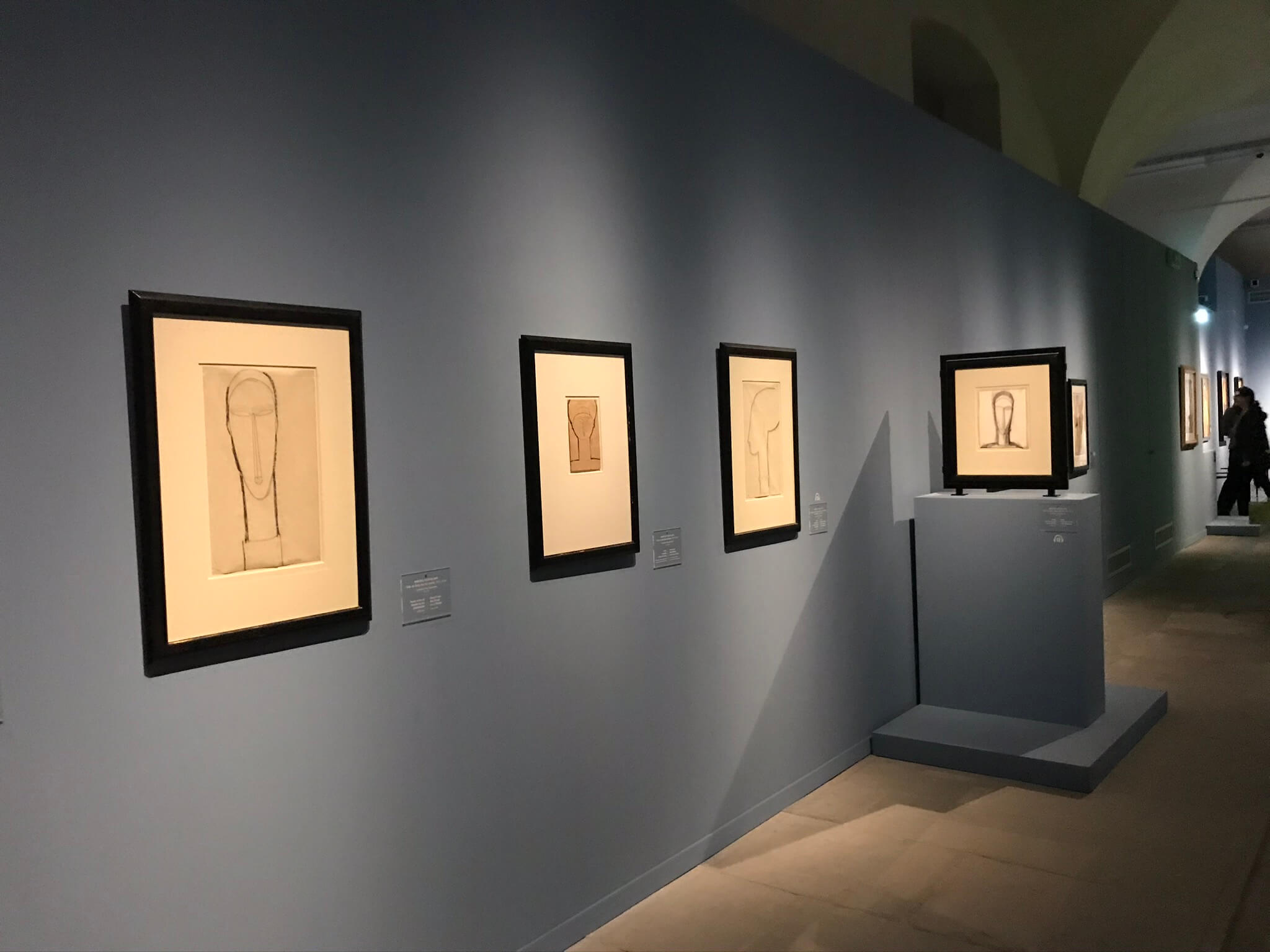 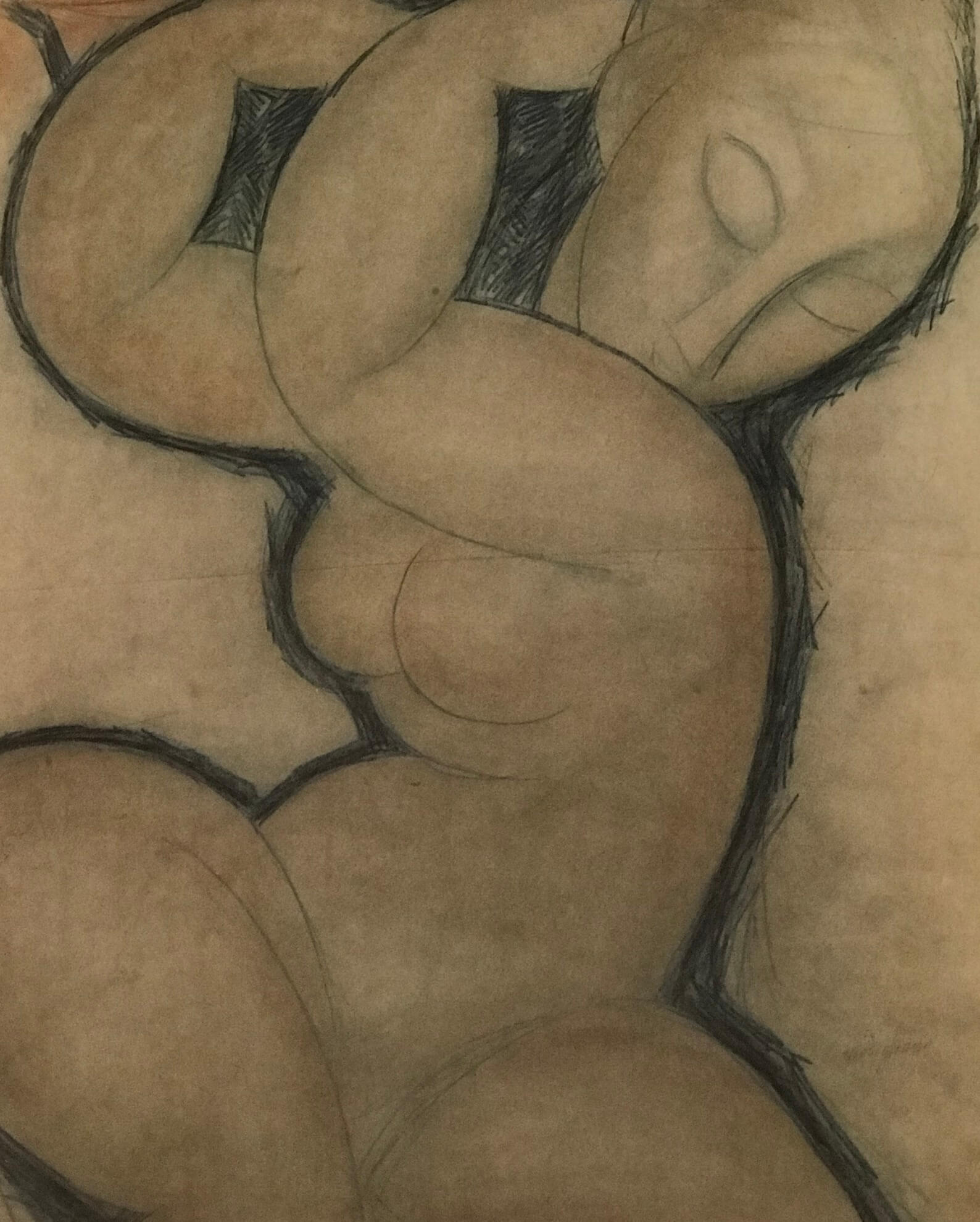 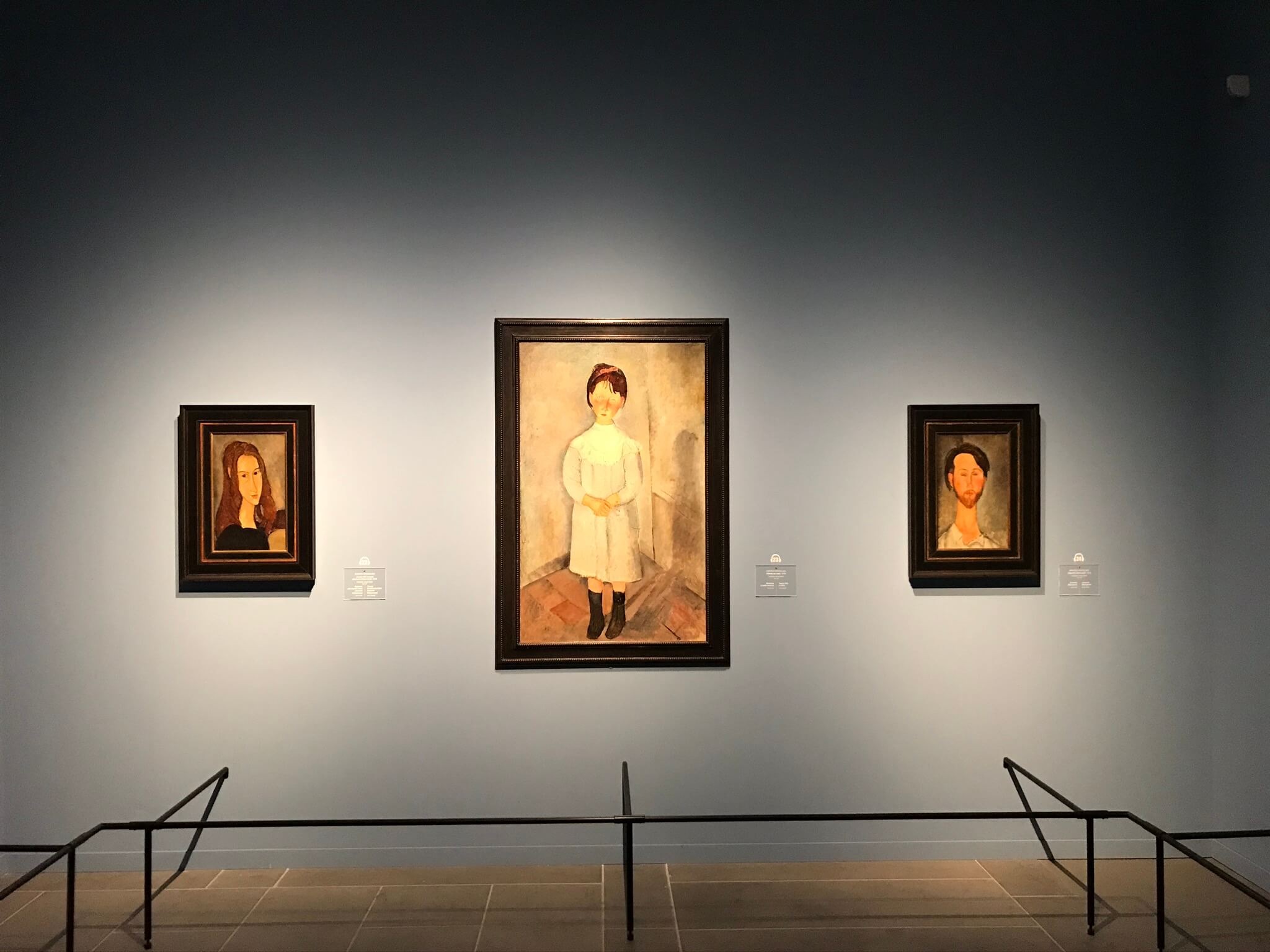 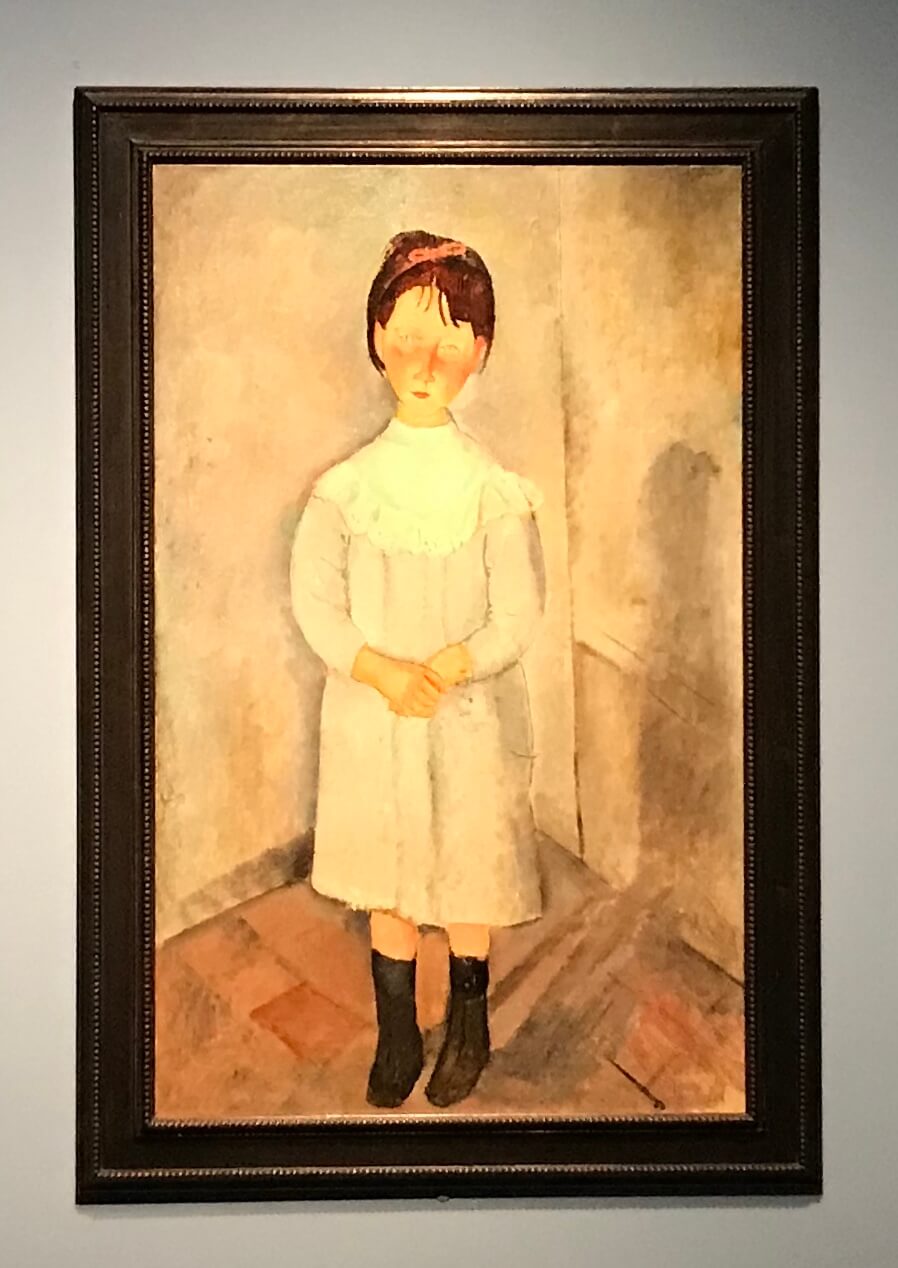 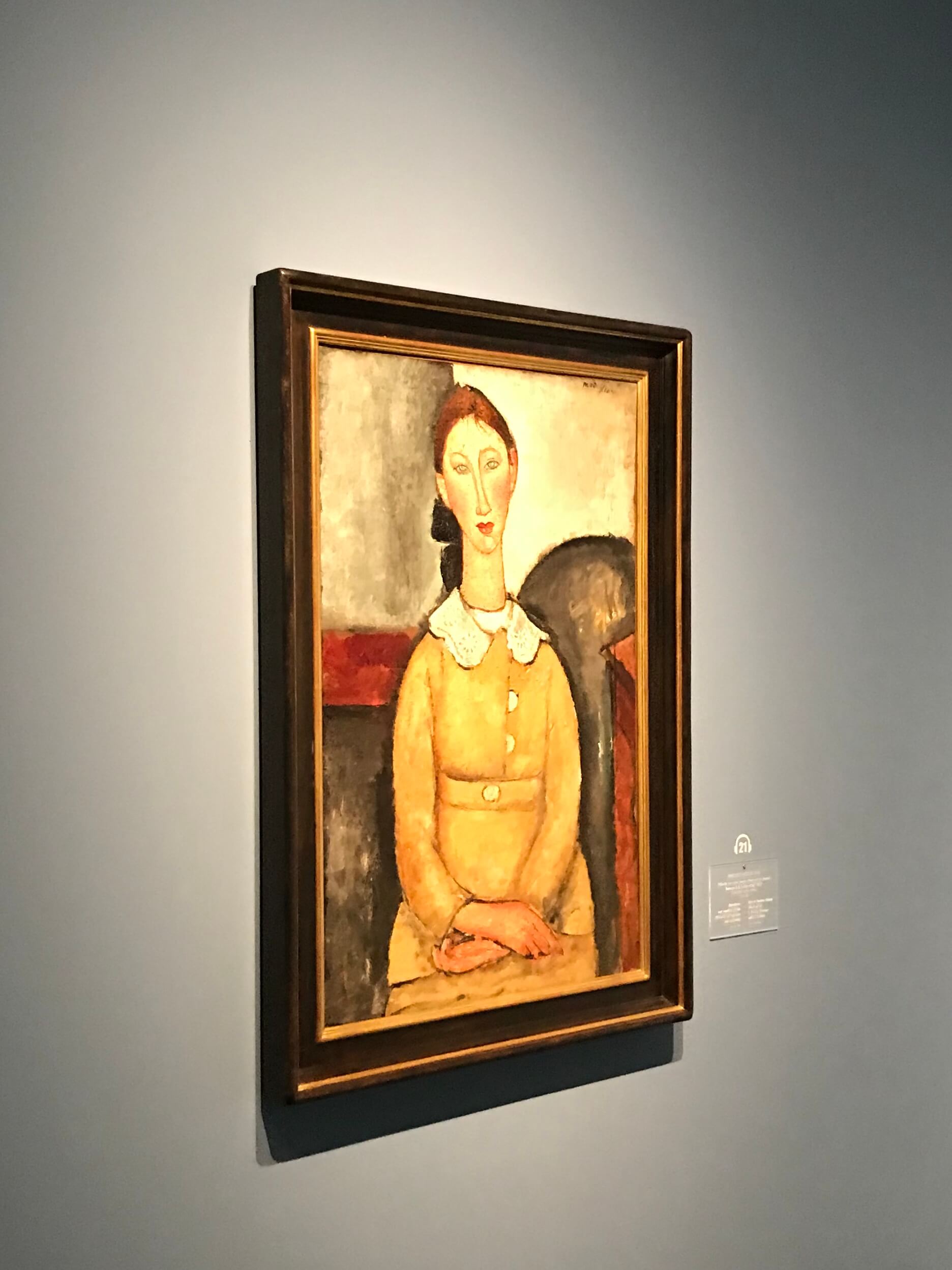 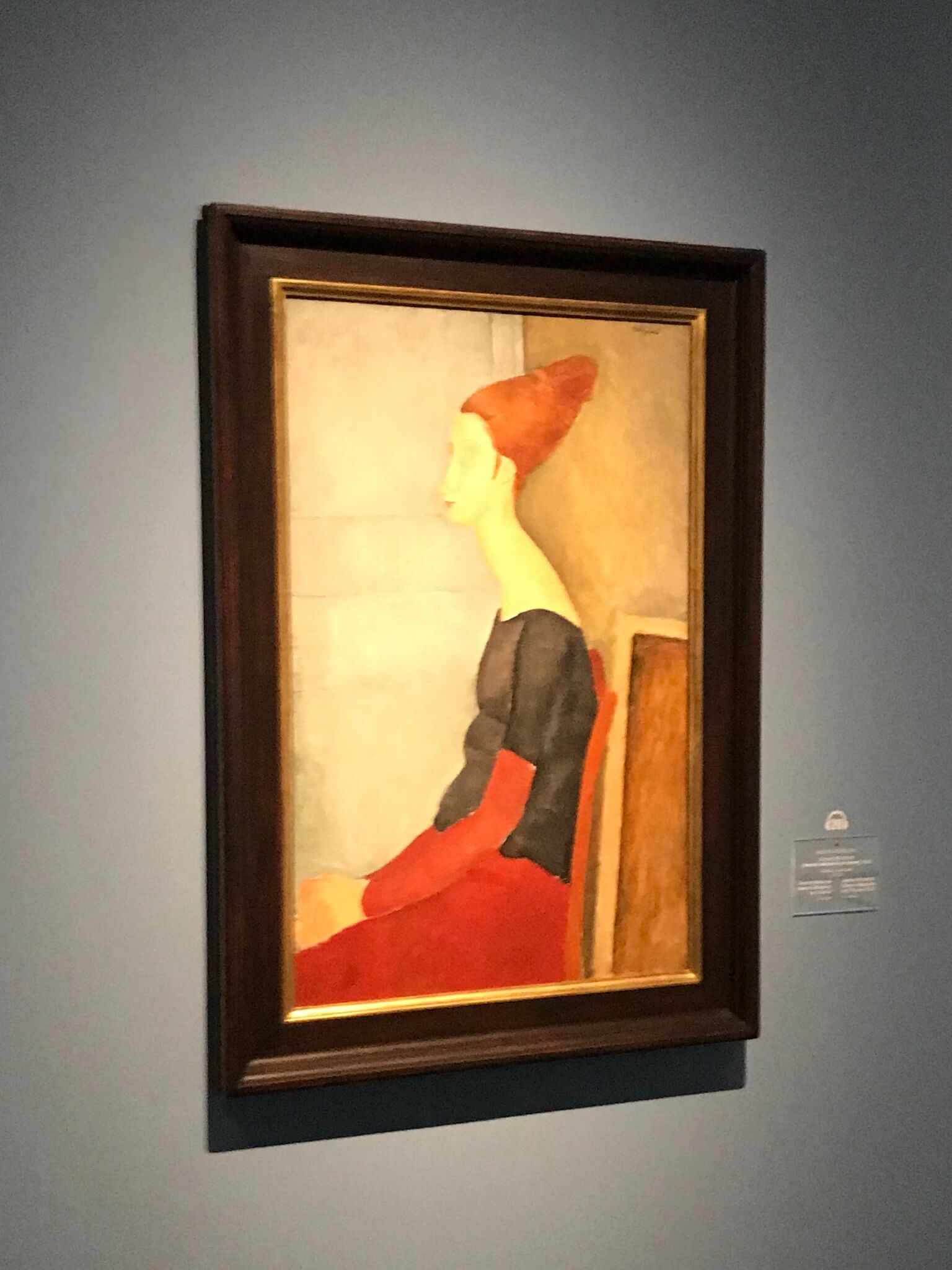 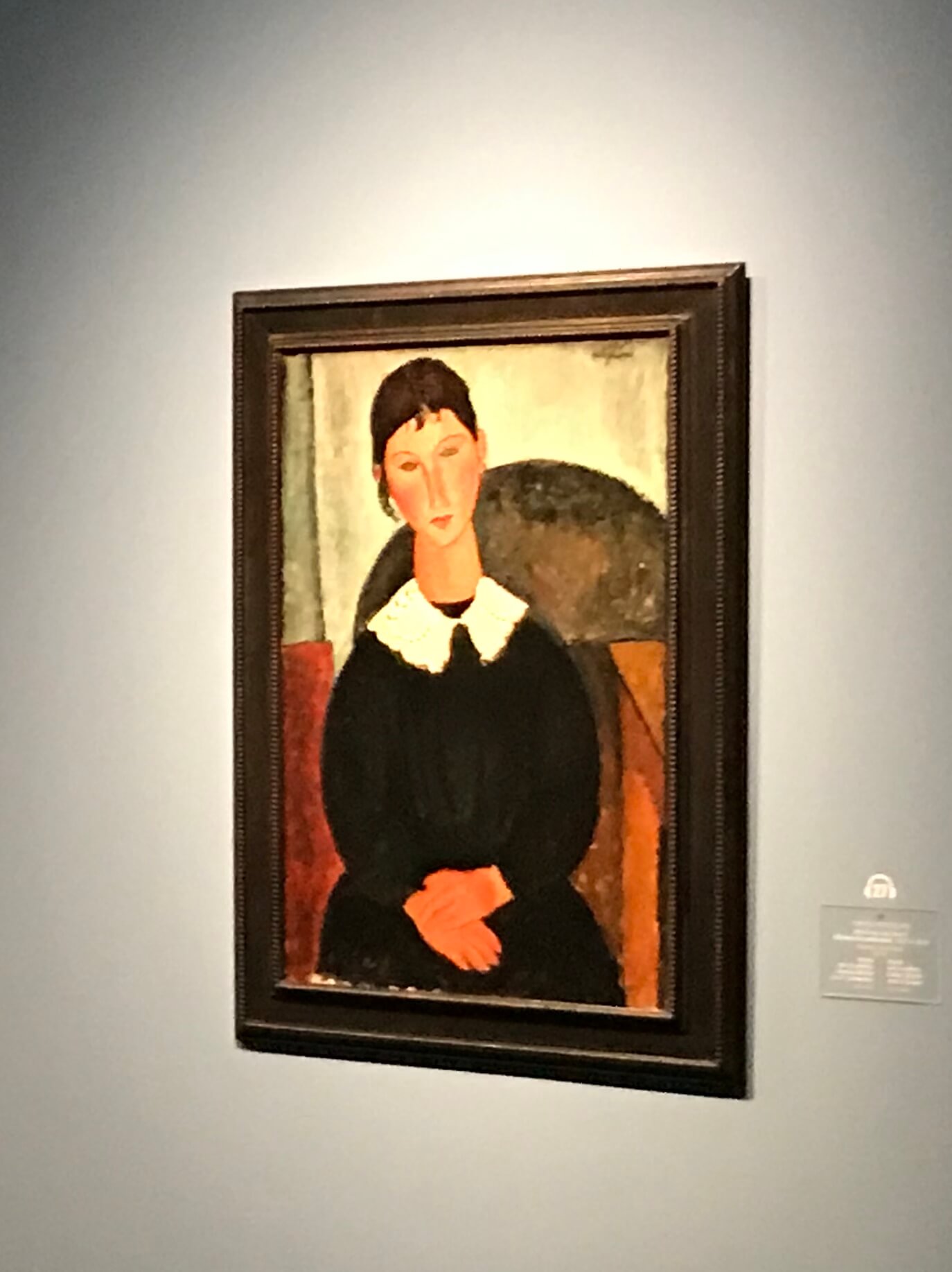 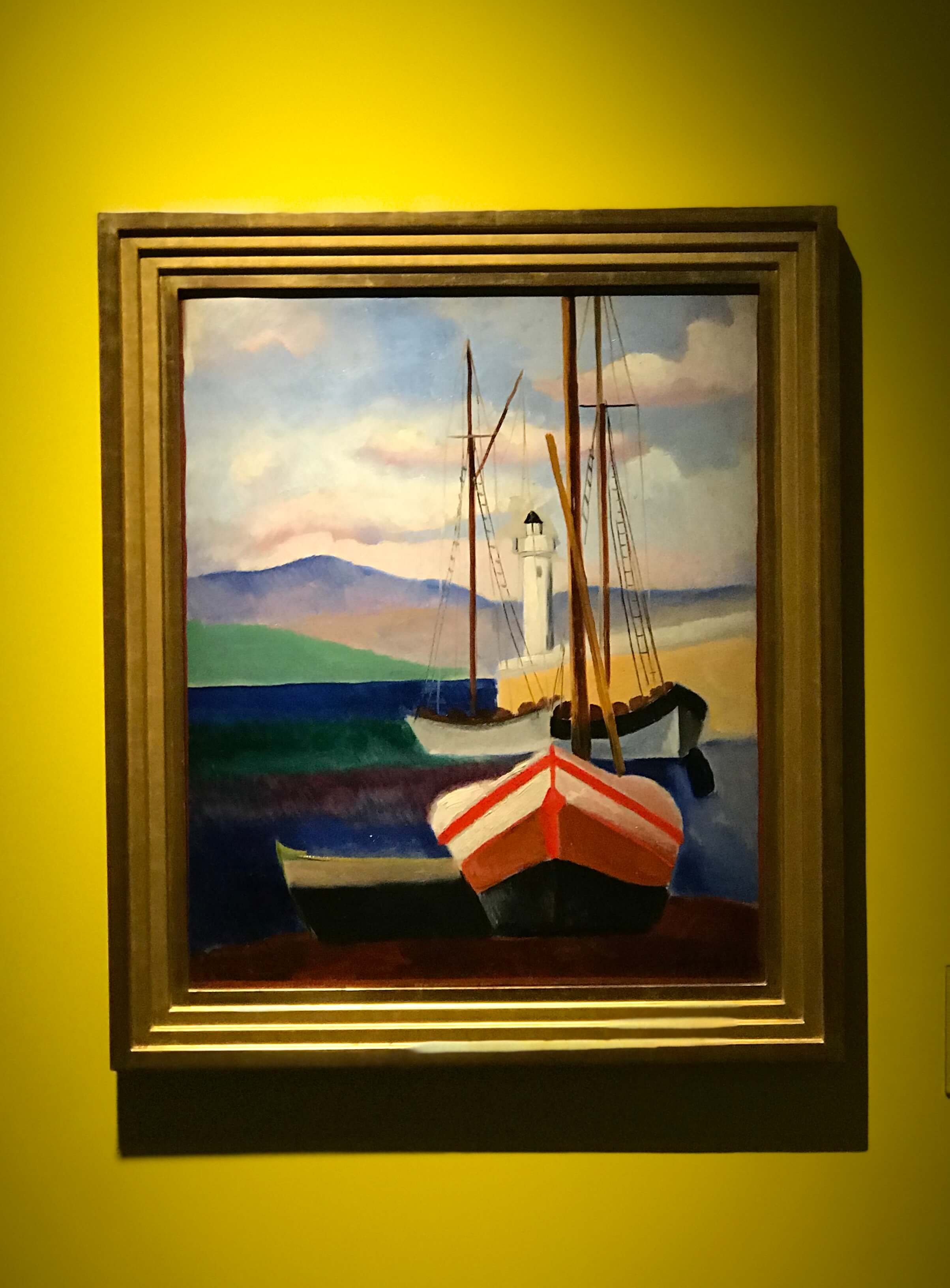 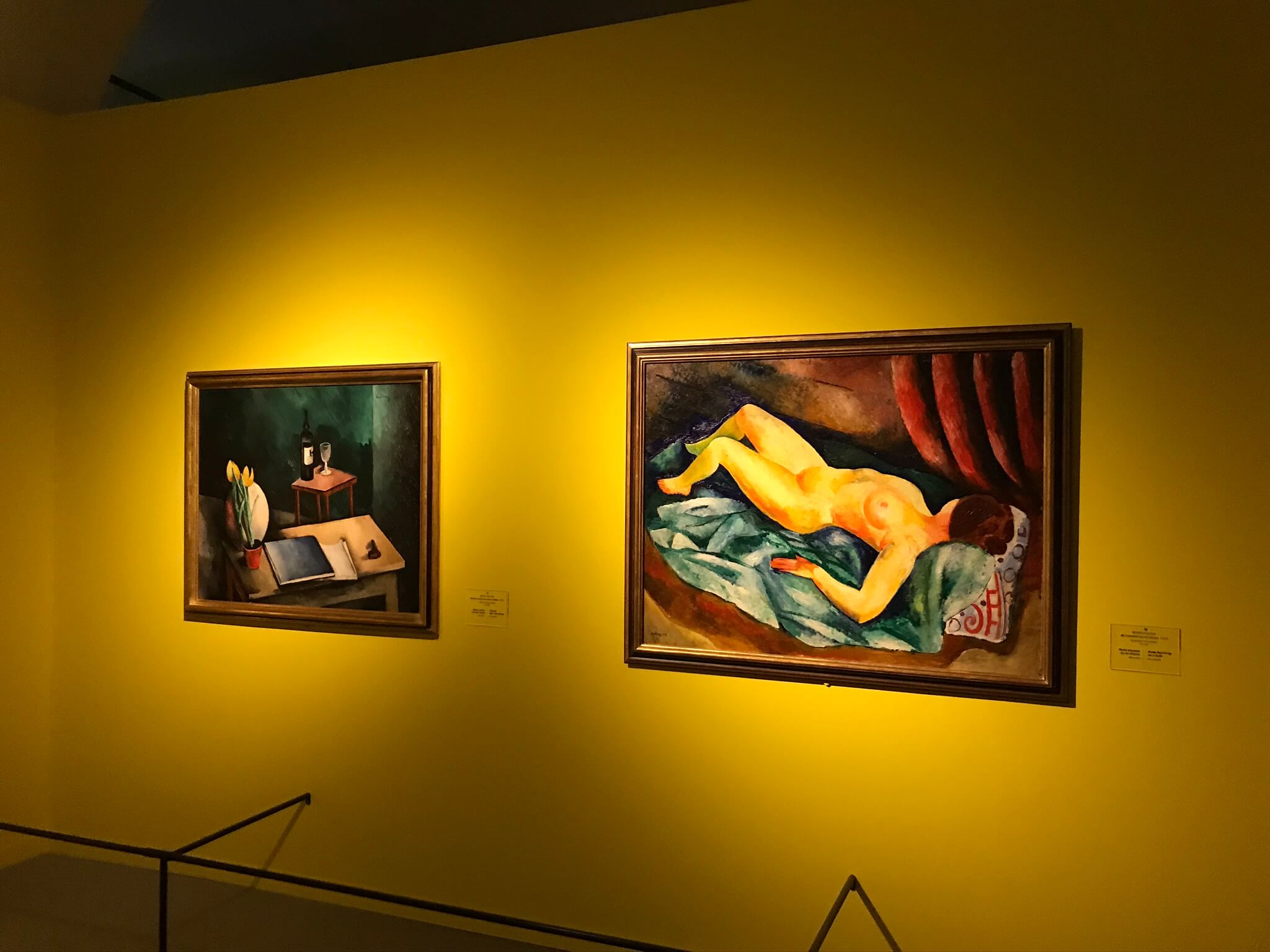 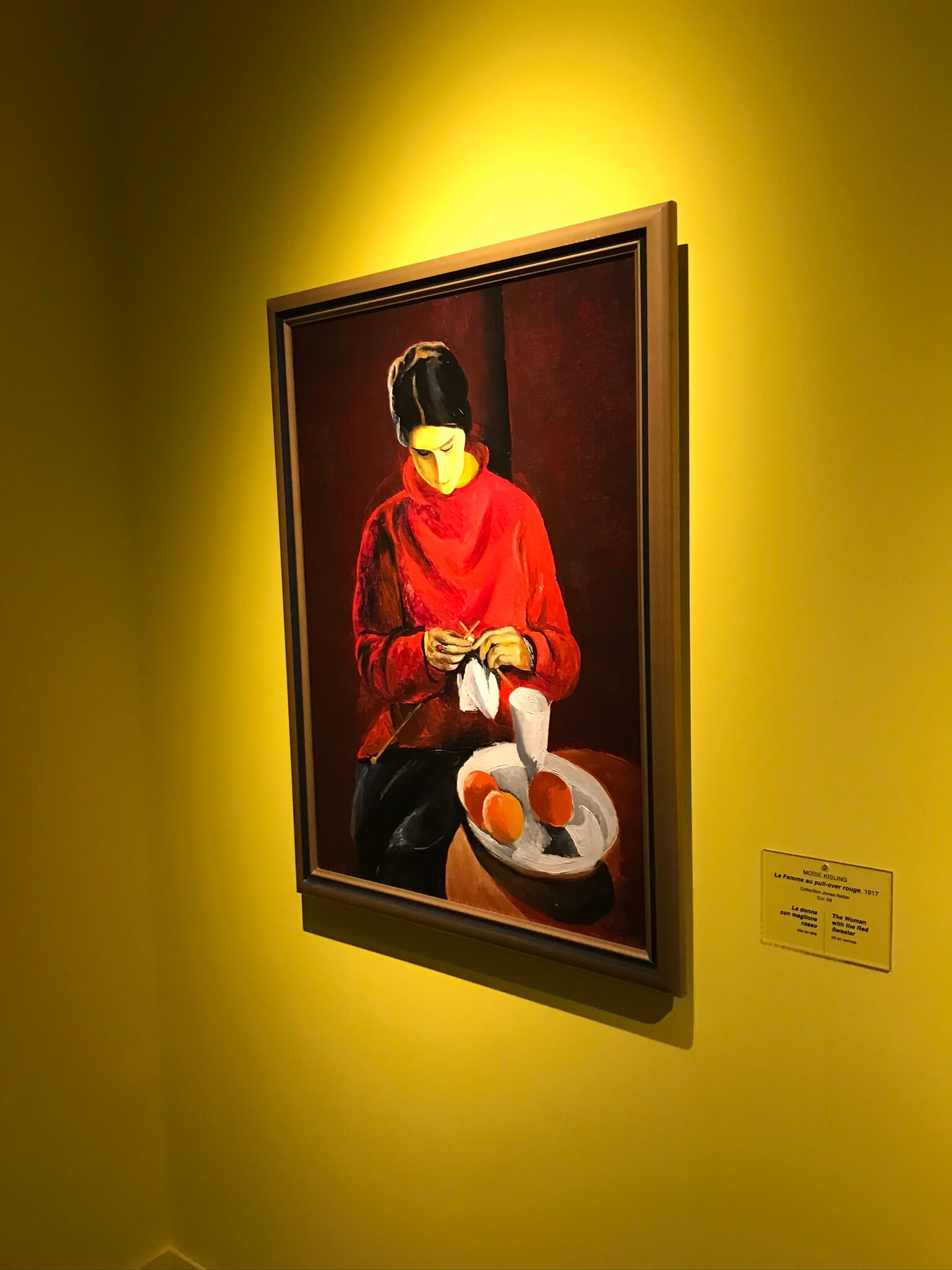 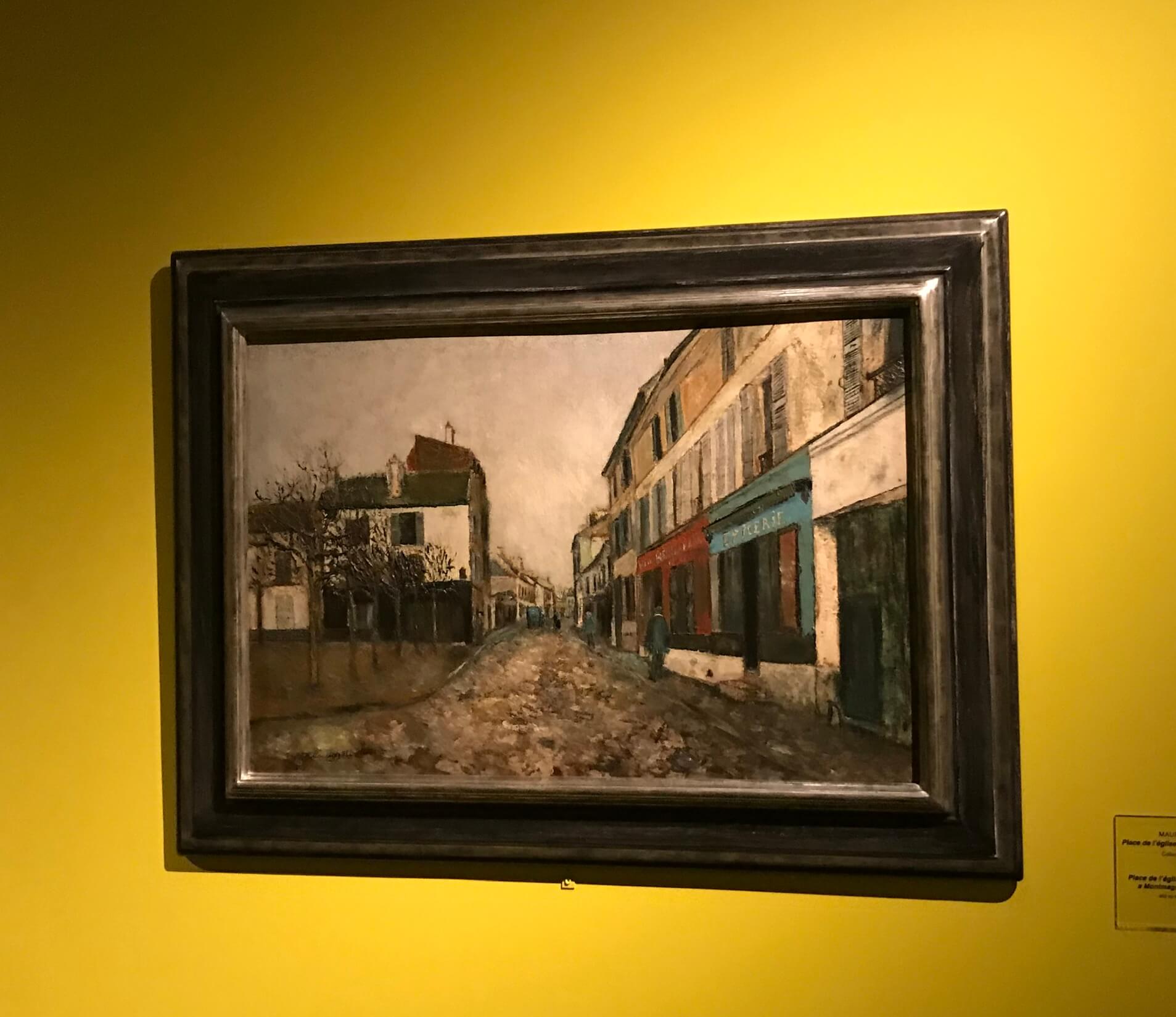 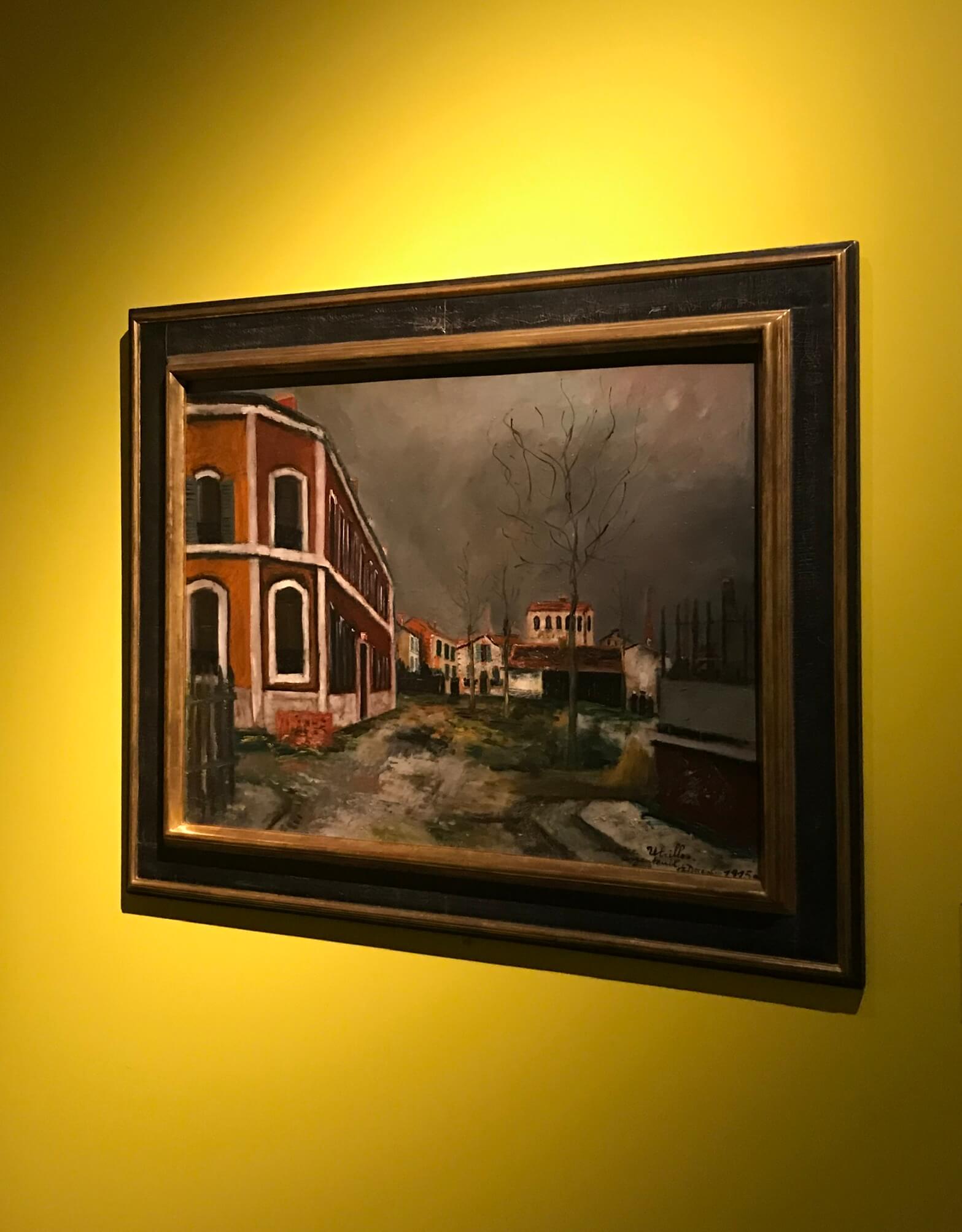 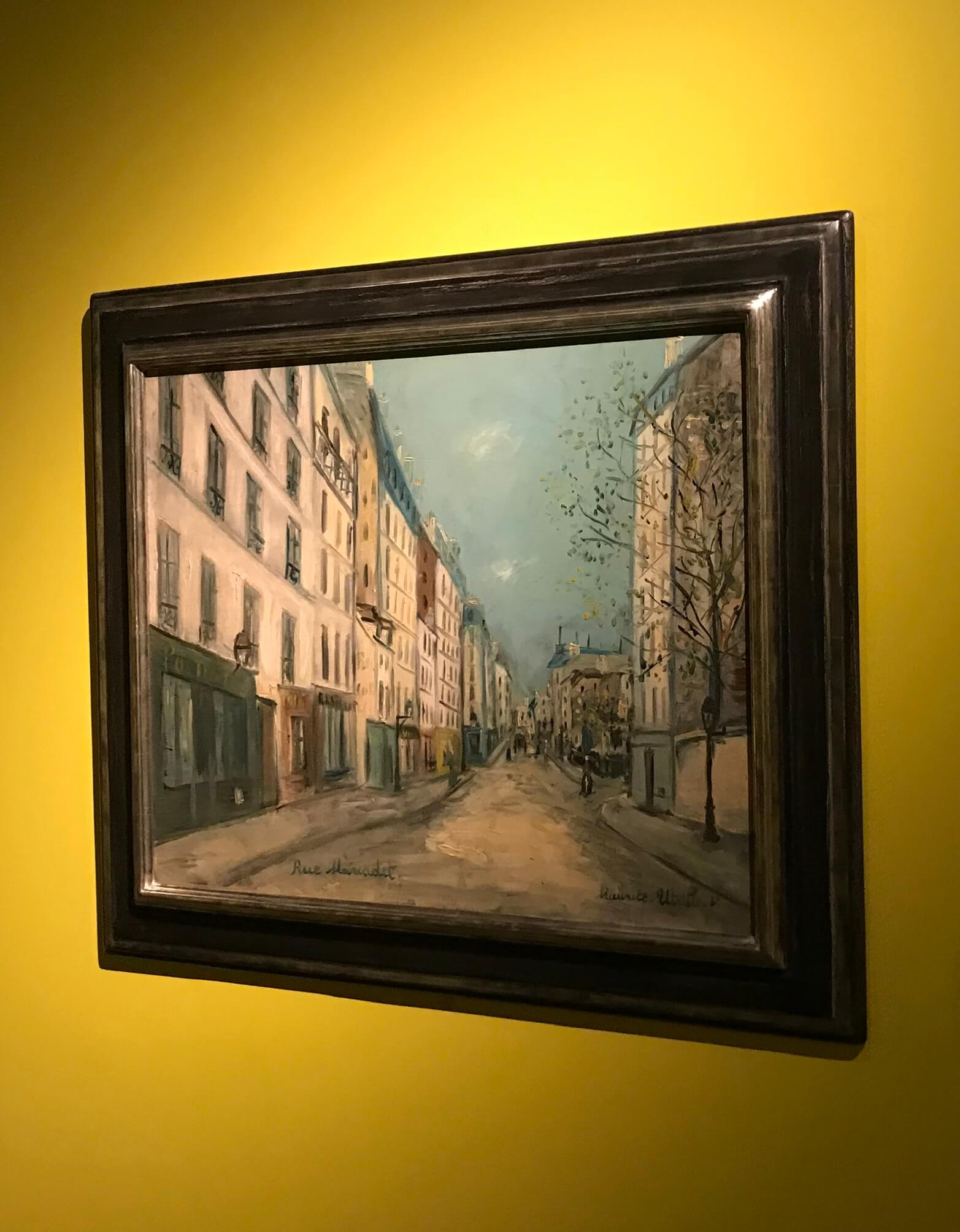 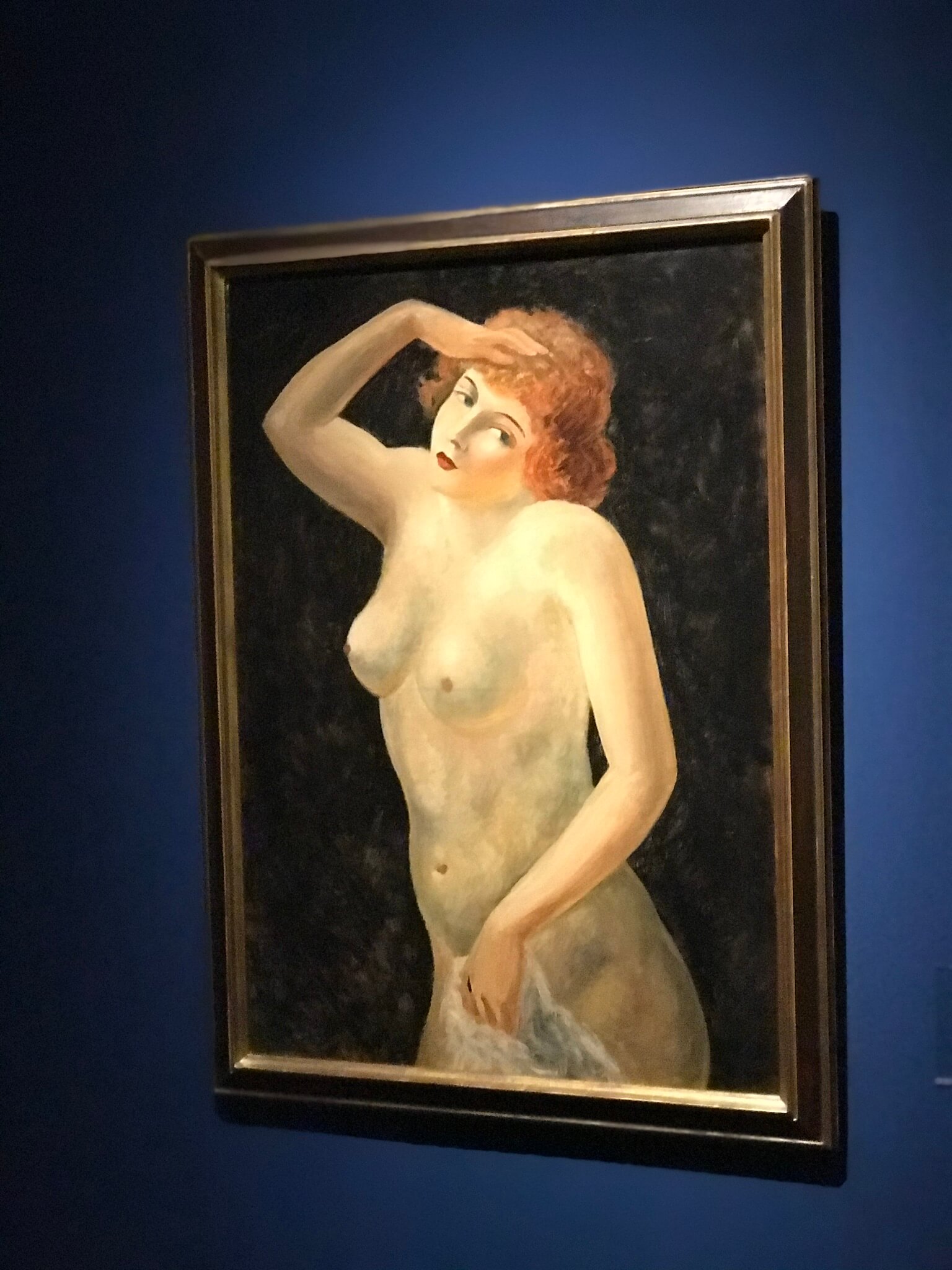 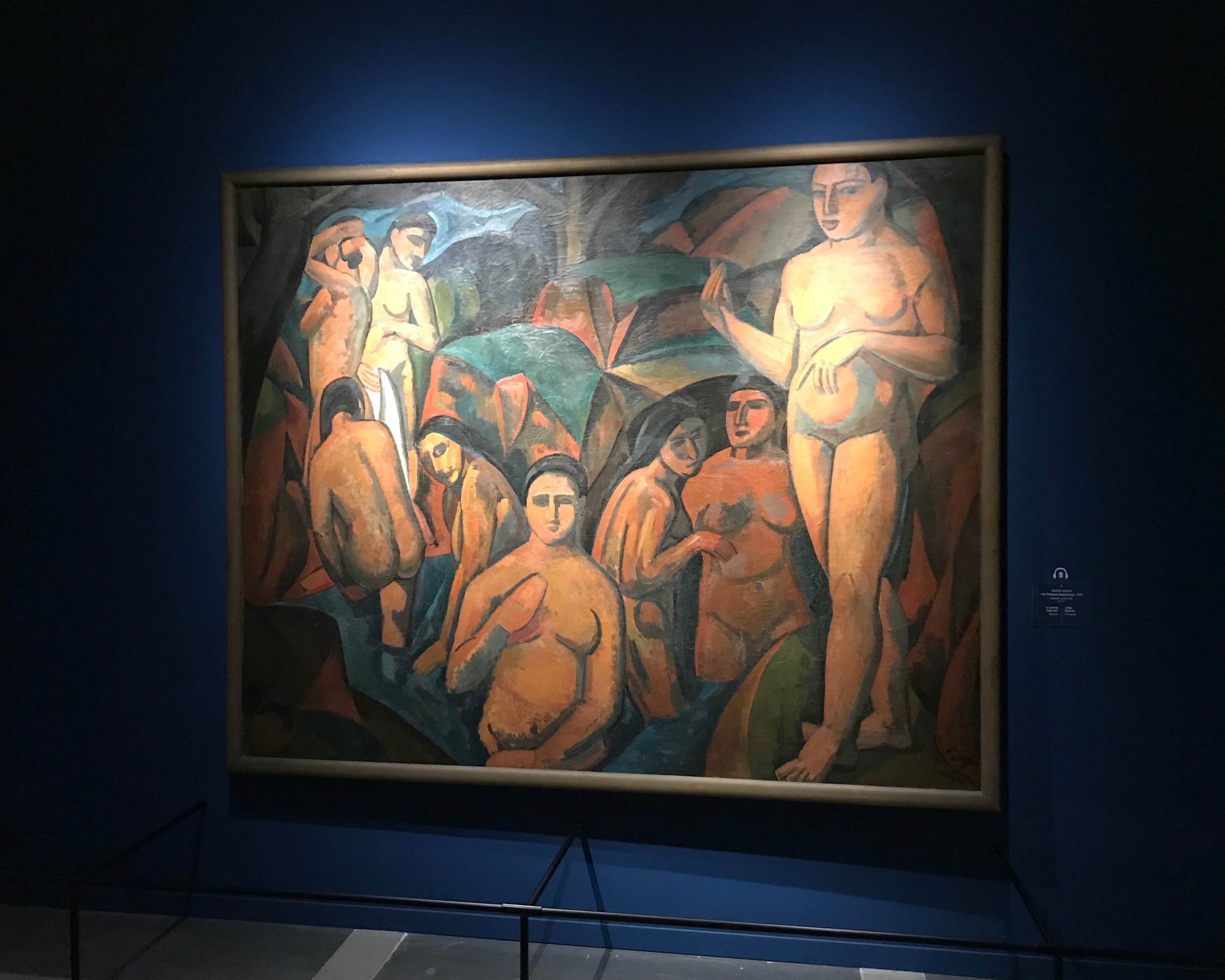