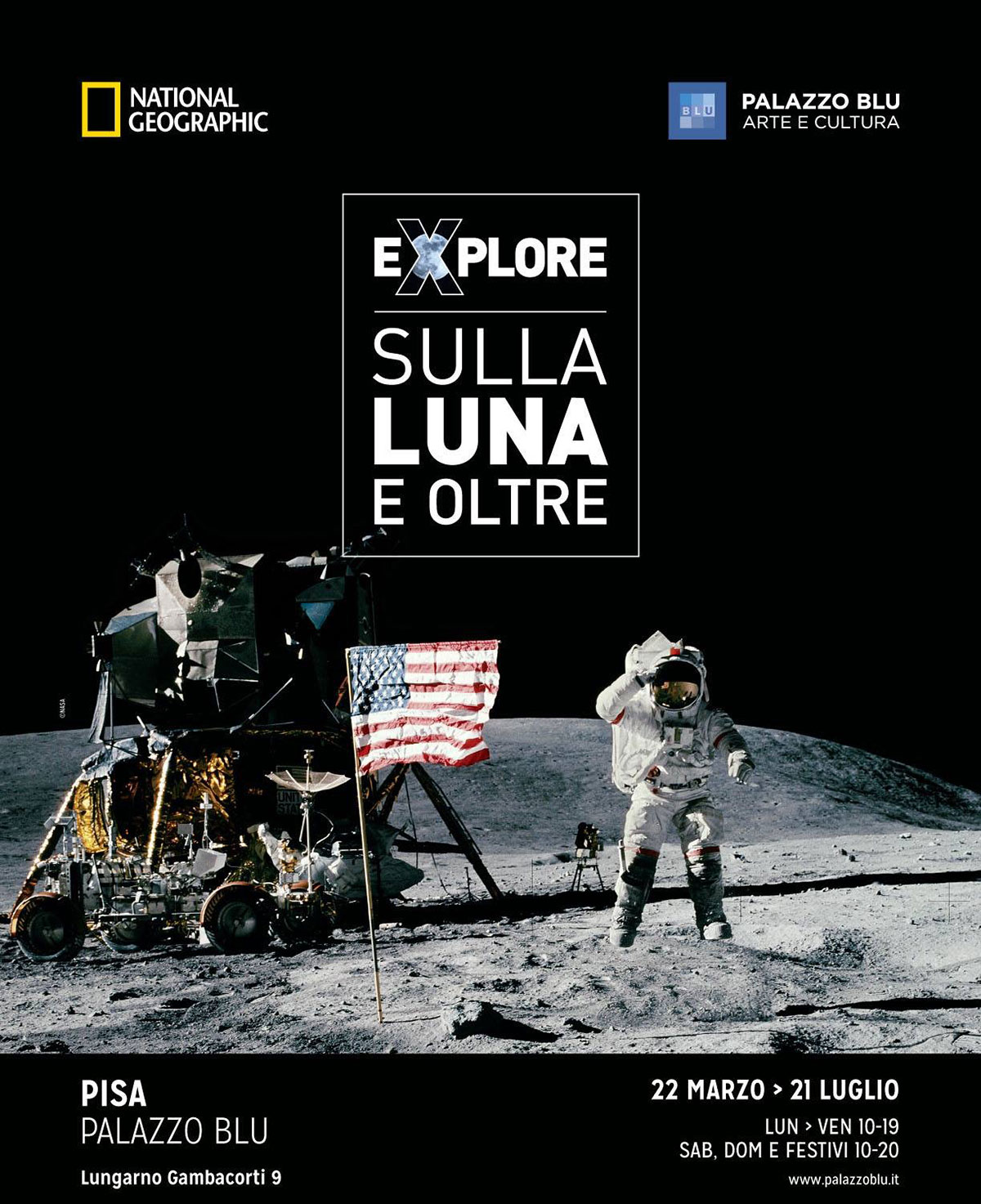 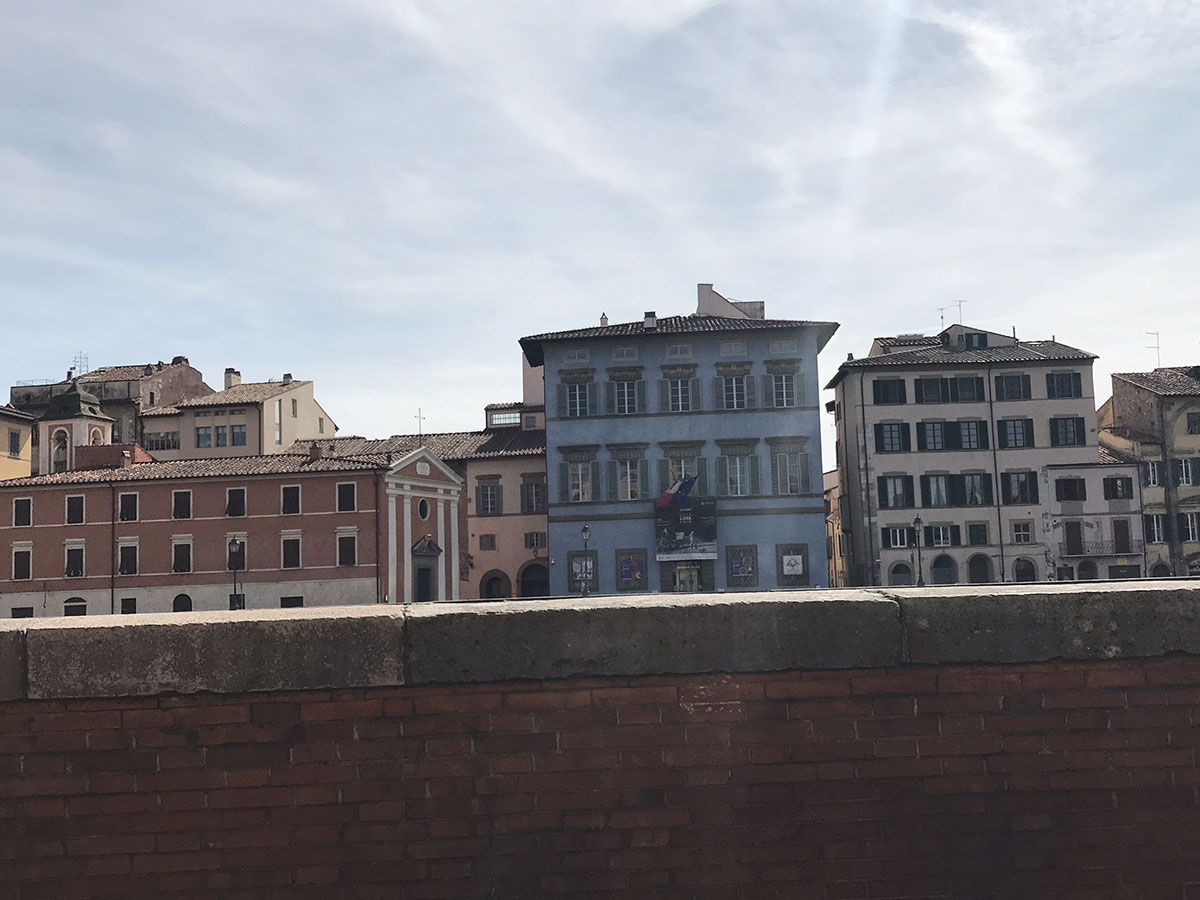 For the 50th anniversary of the first man on the Moon, Palazzo Blu and National Geographic present  “On the moon and beyond“.
From the incredible adventure that brought the man to the Moon (50th anniversary celebrated this year), up to the fantastic images of the boundaries of the Universe. “On the moon and beyond” is the heart of the cultural itinerary, the new exhibition that arrives at Palazzo Blu from March 2019 curated by National Geographic and with the special collaboration of the Italian Space Agency.

A captivating journey across the wonders and mysteries of the universe through a collection of symbolic photos, models, videos and immersive and interactive experiences that offers you the opportunity of retracing the main stages of man’s journey through space. A journey marked by visionary ideas, successes, failures and characters who have written our history. From Yuri Gagarin to Neil Armstrong, the first woman in space Valentina Tereškova up to Laika the dog.

More than 500 men and women have ‘touched’ Space, including the Italians Luca Parmitano who will return on board the International Space Station in 2019, and Samantha Cristoforetti. The history of space expeditions includes missions to discover the secrets of the Sun – the uncontested protagonist located in the center of the Solar System, but also to know the icy gas giants like Jupiter, Saturn and Uranus, and the rocky and hot planets like Venus and Mercury. Without omitting Mars, the planet that most of all has challenged the human imagination, a red desert that could have hosted life in its distant past and today still preserves lakes of liquid water in the subsoil. Earth’s ‘younger brother’ touched between successes and failures, from the Viking probes to the latest Curiosity and the European ExoMars with its unfortunate Schiaparelli lander.

Palazzo Blu exhibition leads to the discovery of the International Space Station that represents the human outpost in Space: a zero-gravity environment orbiting the Earth, which in about two decades has hosted on board more than 200 astronauts from 18 Countries. It is also a unique scientific laboratory and a symbol of international cooperation. And finally, the Earth seen from the Space and defined as The Blue Marble in one of the rare photos that sketches our entire and completely illuminated planet. There is a unique point of observation in Space, from which you can understand the fragility and complexity of our planet.

The exhibition “On the moon and beyond” is also an invitation to question what the future of explorations will reserve, since today the project of the first human colonies on Mars and on Moon is very demanding. The exhibition was designed for all ages, from adults to children, with educational paths for the classes built to integrate with the school programs and, thanks to the guidance of the educational staff, young people are also involved in order to understand the important scientific phenomena. 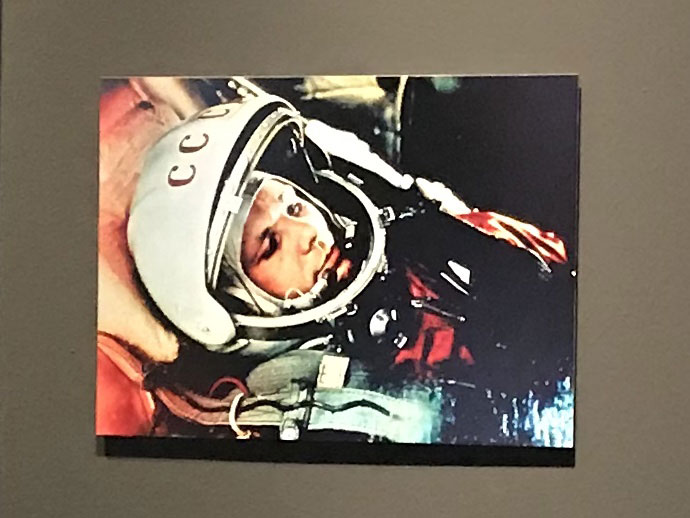 YURI GAGARIN was the first Man in the space.
He was launched on board the Vostok 1 space capsule on 12 APRIL 1961 at 9:07am Moscow time and bis flight ended at 10:55am 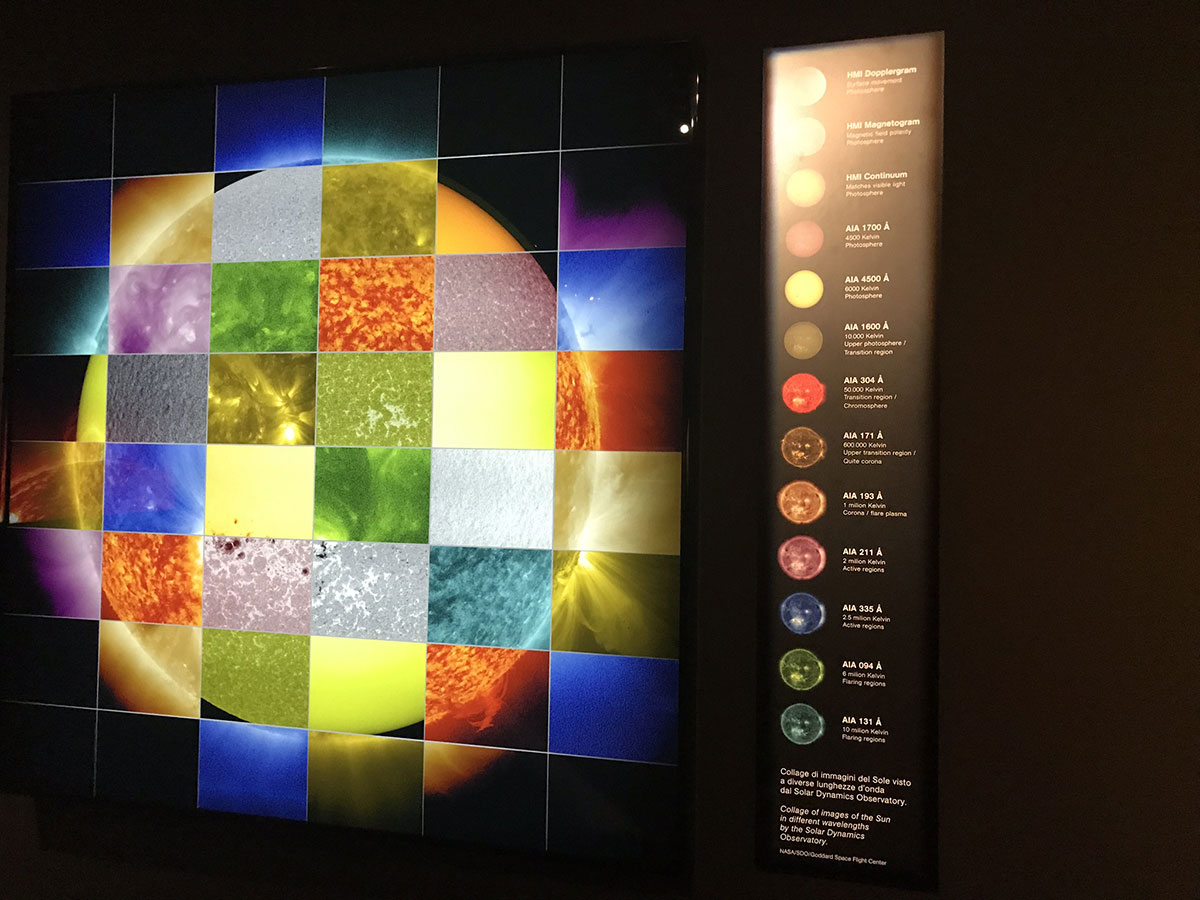 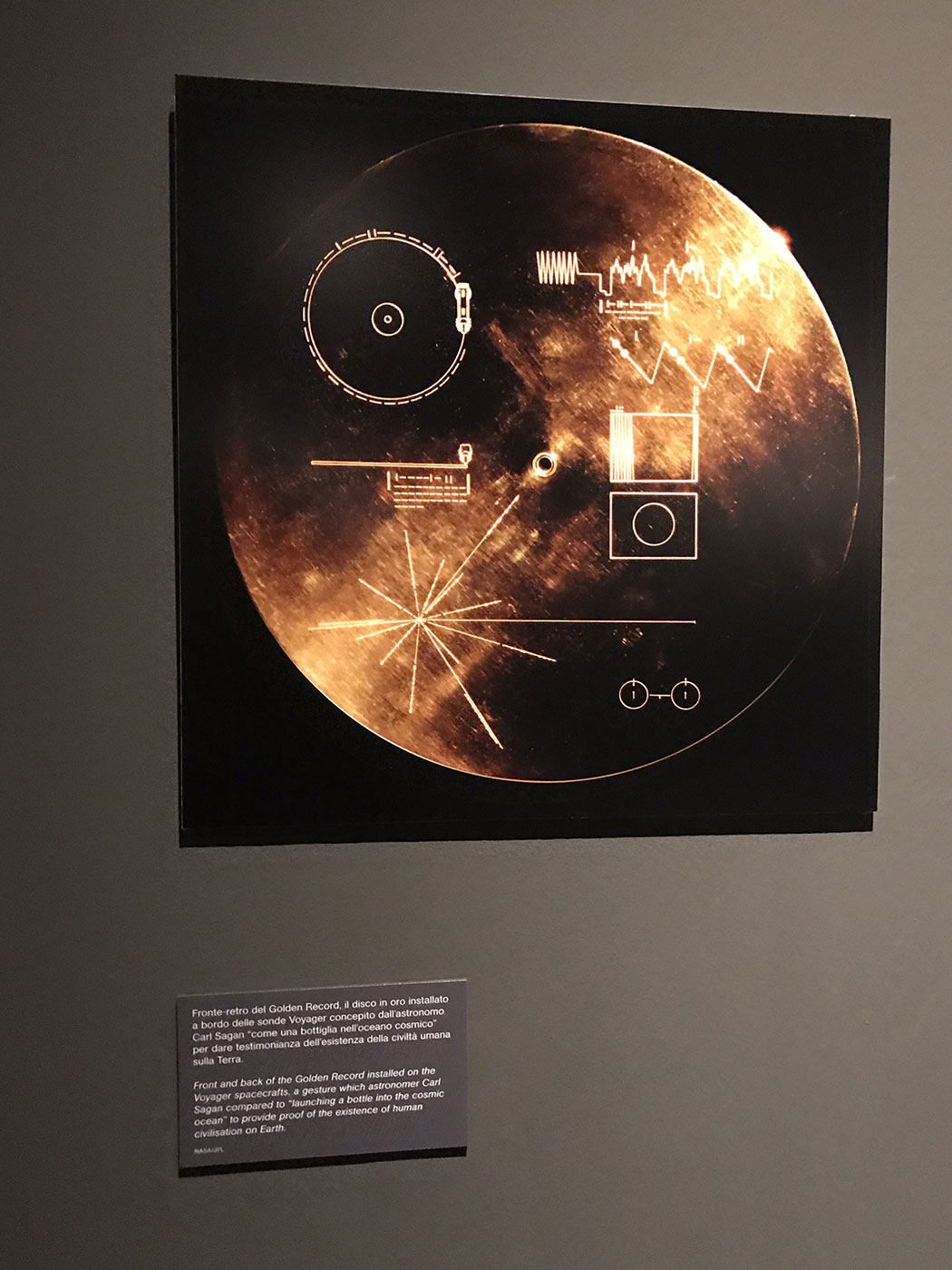 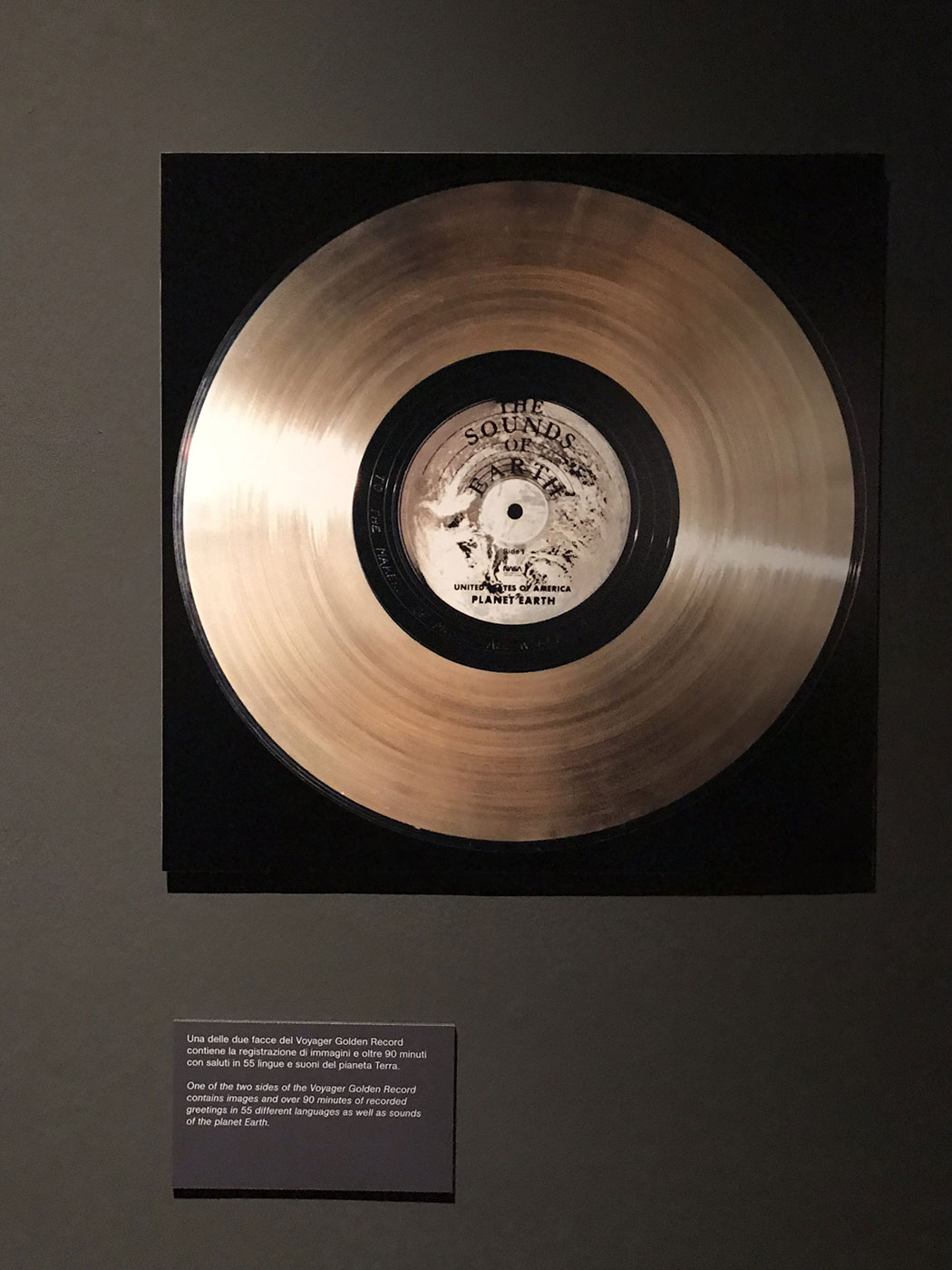 Front and back of the Golden Record installed on the Voyager spacecrafts, a gesture which astronomer Carl Sagan compared to “launching a bottle into the cosmico ocean” to provide proof of the existence of human civilisation on Earth. 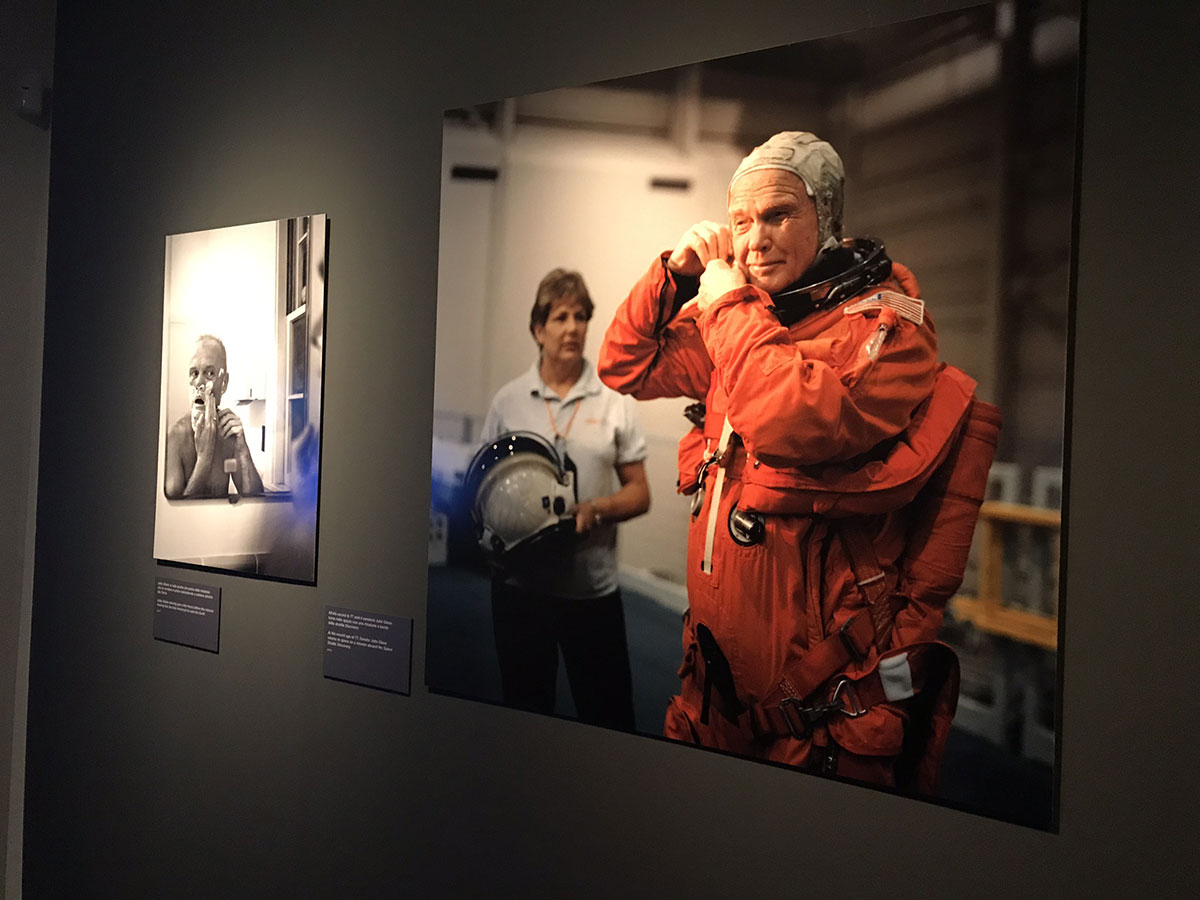 John Glenn in 1962 while shaving a few hours before the mission that will make him the first American to orbit the earth and then to the record age of 77 when he returns to space with a mission aboard the Shuttle Discovery. 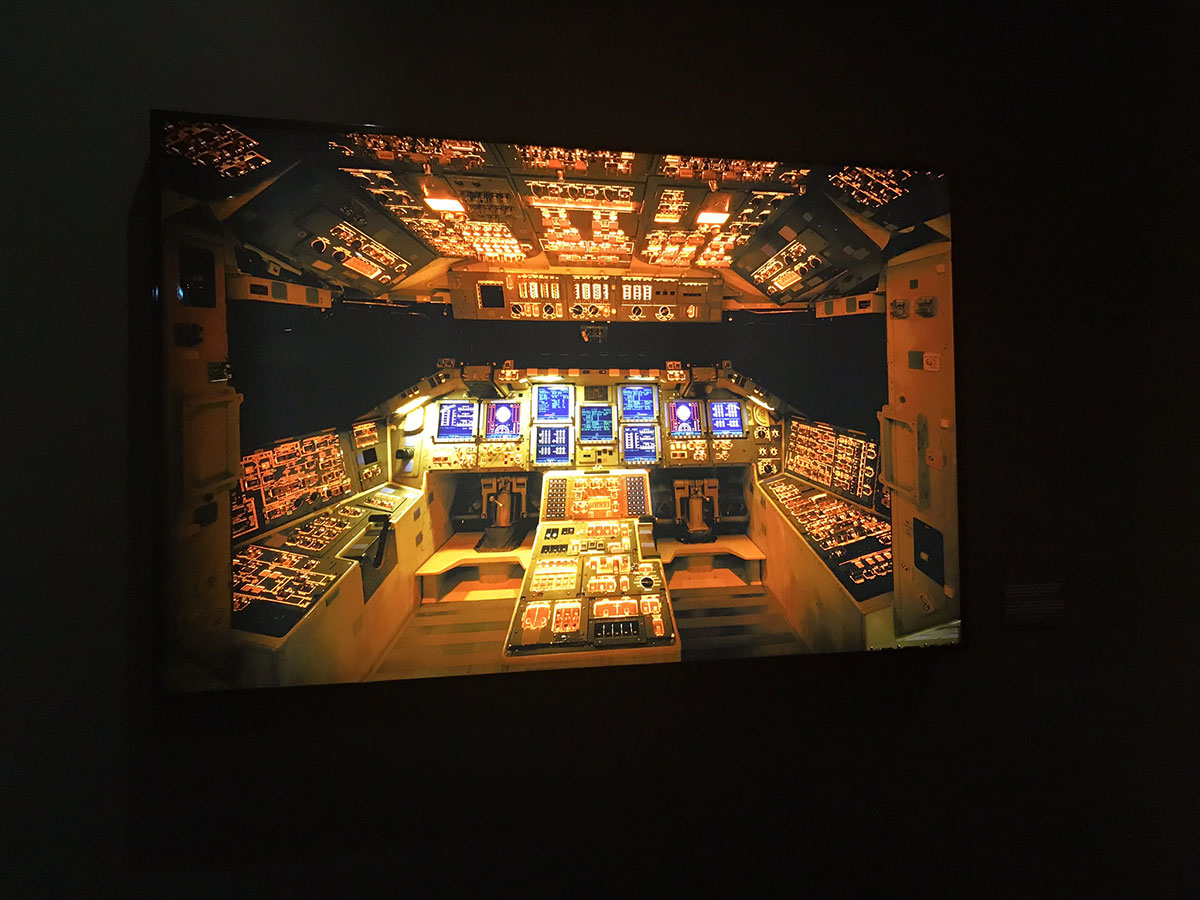 The complex control panel of the first Space Shuttles. 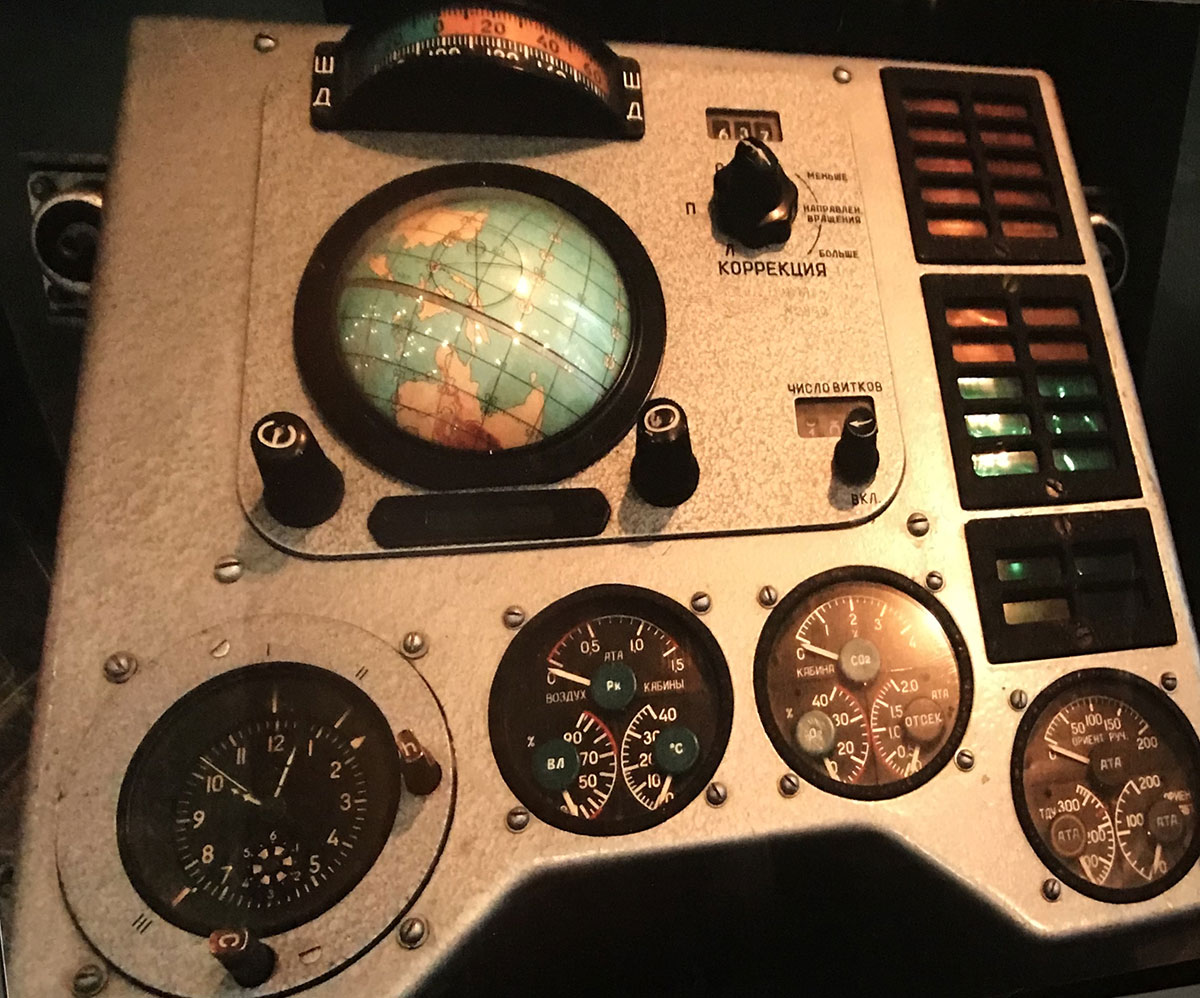 The uncluttered control panel of the Vostok 1 capsule which flow Yuri Gagarin to space in 1961. 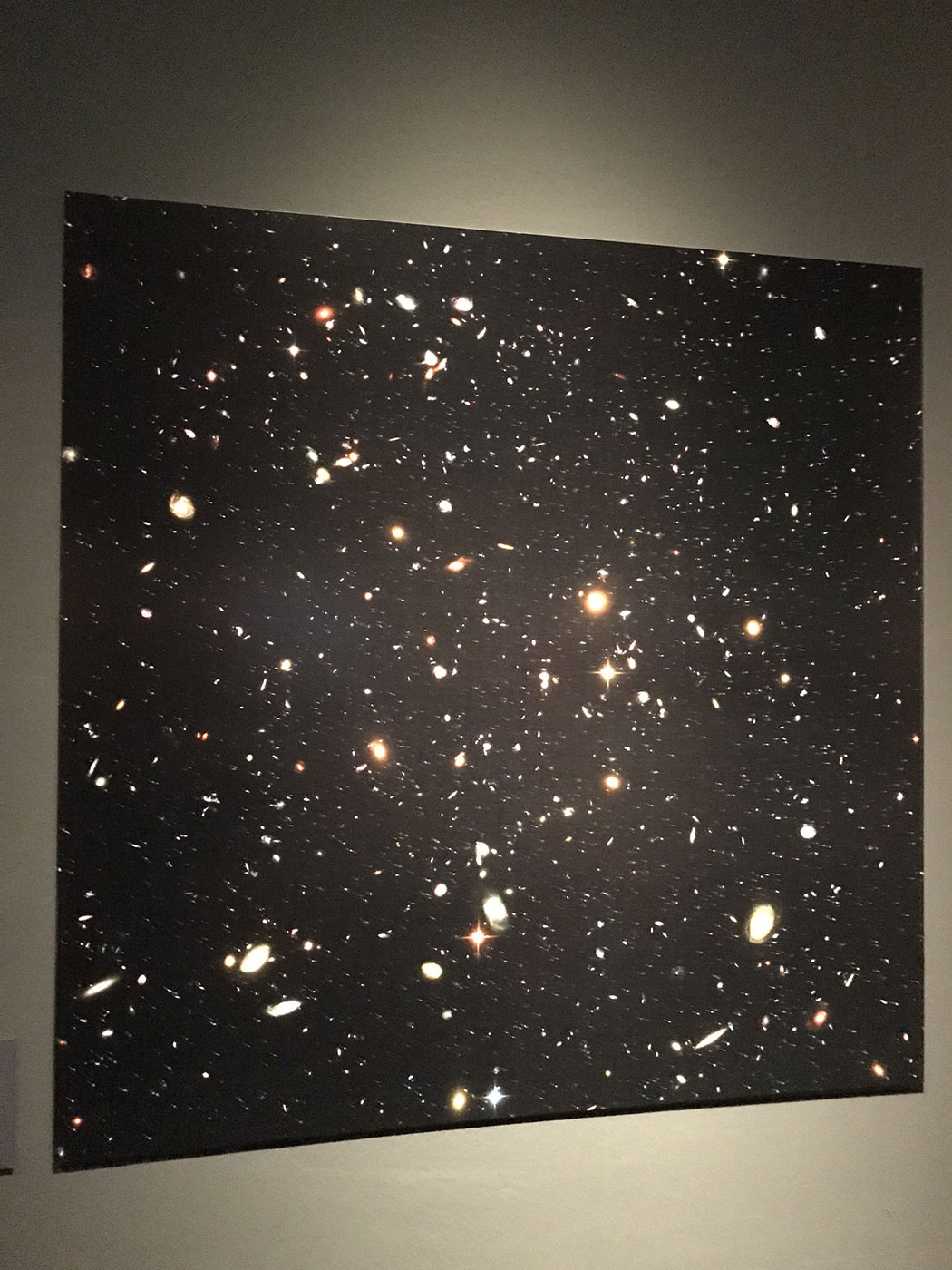 Hubble Ultra Deep Field is the deepest image of the Universe, enabling us to see up to 13 billion years back in time.
Realised with an exposure of one million seconds, it shows about 10000 galaxies. 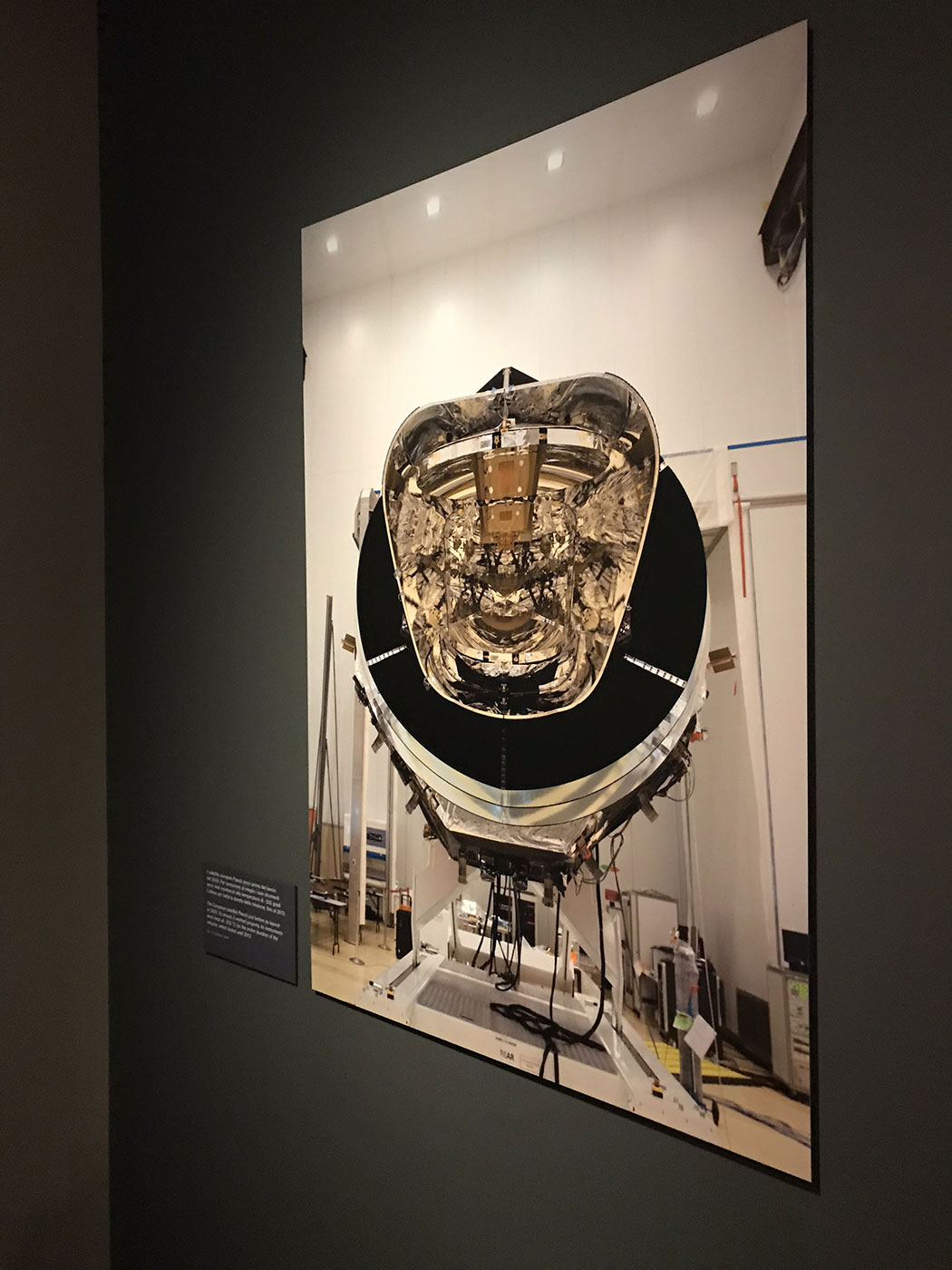 In the picture, the main mirror of the James Webb Space Telescope (scheduled to launch in 2021 aboard a European Ariane 5 launcher). Is made up of 18 hexagonal mirrors arranged in a honeycomb pattern measuring 6,5 metres in diameter overall. 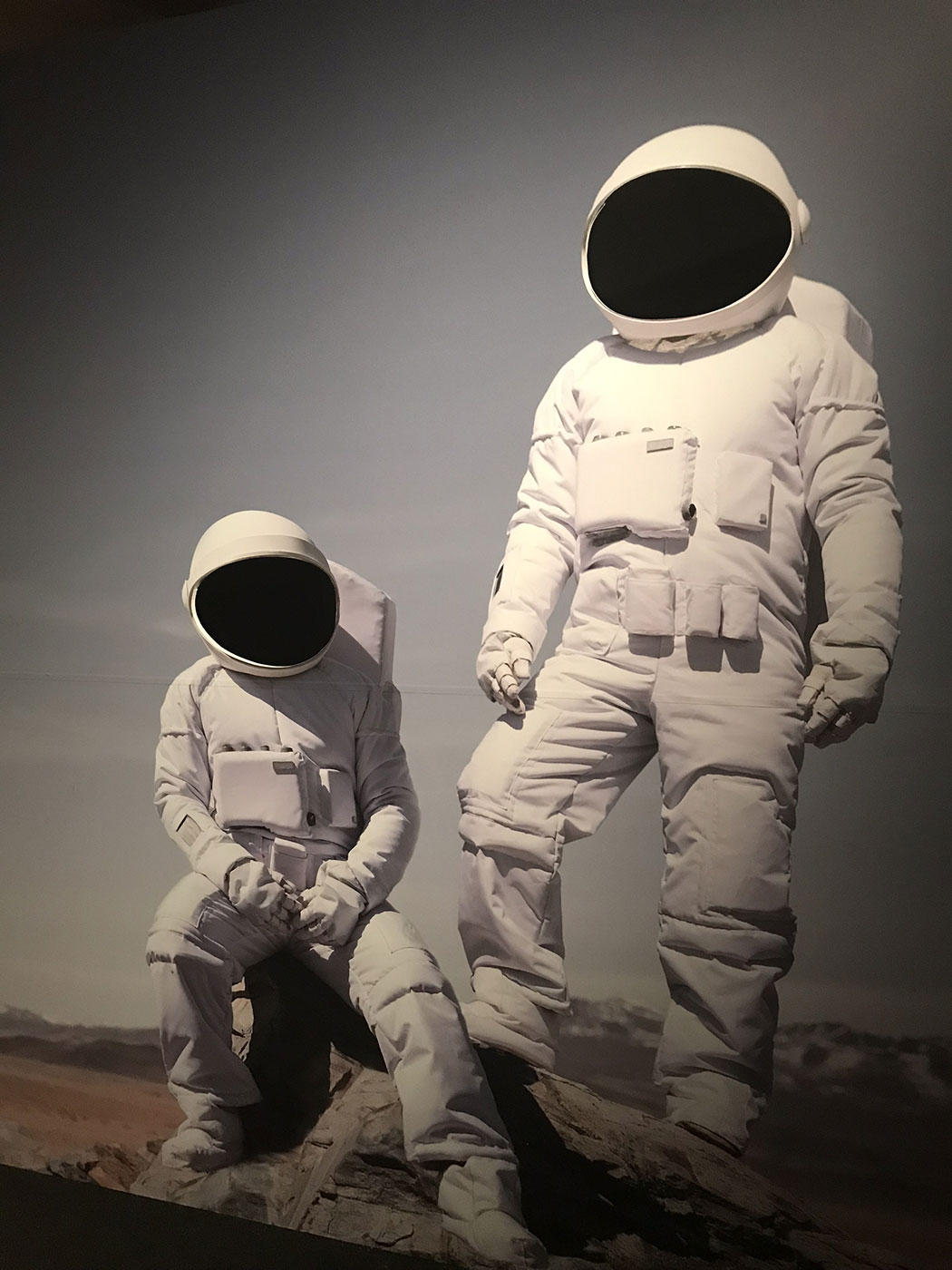